On Monday evening (August 22nd), at 10.05pm, the Transocean Winner rig was successfully removed from the rocks at Dalmore. The structure was taken to Broad Bay, in a tow that took nearly 48 hours. There, it will be assessed for damage and a decision is to be taken at a later date as to how it will be taken to a facility for demolition. Although the local council have offered the services of the Arnish Fabrication Yard, the rig's owners (Transocean) have said that there is insufficient depth of water in the channel to the Yard to take the rig.

I went to Dalmore on Monday evening by bus, firstly by service bus to the end of the road leading into the village itself. The last half mile was covered in a convoy. People had parked their vehicles in the verge of the road. From the road end, a dedicated shuttle bus was ferrying spectators back and forth to the village, where a viewing area had been marked out. In the end, I estimate that about 200 people were watching. I found myself close to someone with a radio receiver, and I could hear the communications between the tugs, the crew on the rig and the salvage master, Sylvia Tervoort.

When high tide approached, the tugs were told to gradually increase the force applied to the tow wires, until, at 10.05pm, 120 tons on the wire (and 75% of power) dragged the Transocean Winner off the rocks. The next discussion was about the course to take, and Ms Tervoort told the captain of one of the tugs that this had been outlined in an email. The captain blustered (in Dutch) that he didn't have time to have his head stuck in front of a computer all blinking day - he had not read the email and was embarrassed to be found in ignorance.

By half past ten, the tow was well underway and I made my way back to the road. A fleet of emergency vehicles were leaving, and I found myself in the back of an ambulance. Other people, who were walking up the road, were also picked up. My taxi came at 11pm, as arranged (although the police had to render some assistance) and under a rising moon, I returned to Stornoway at 11.30pm. 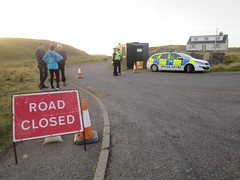 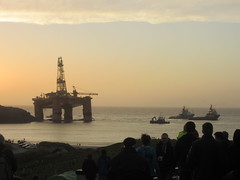 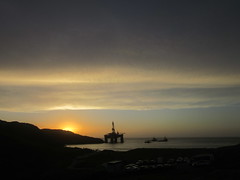 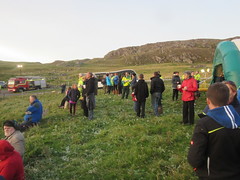 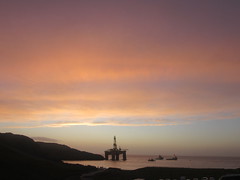 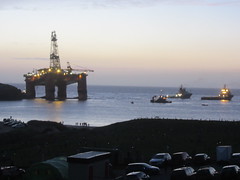 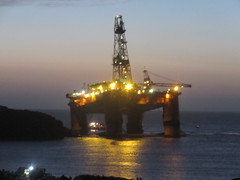 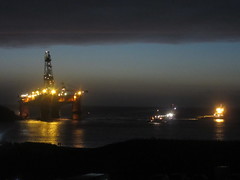