A brighter day than yesterday, with some sunny or at least bright intervals. However, it is mid December, so the sun sets not long after 3.30pm. I spent an hour and a half in the library, first half hour doing battle with a magnifying lens on a microfilm reader; when I got it to focus properly, I found nearly 20 tributes from the last couple of weeks from the First World War. I came out of the library at 4.30, meaning it was dark outside. 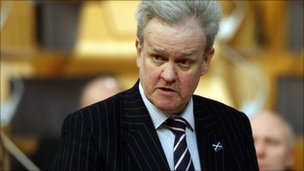 I returned home to the welcome news that the Scottish transport secretary, Stewart Stevenson, has finally bowed to the inevitable and resigned. Mr Stevenson had planned to throw in the towel on Thursday, but had been persuaded by the First Minister to hang on. I am pleased that the Transport Secretary has quit, as he was ultimately responsible for communication and coordinating the emergency response.
Posted by ADB at 17:05 No comments: Links to this post