A beautifully sunny day, with the mercury cresting at a reasonable 12C in the afternoon. As I type this, at a quarter to eleven at night, we're down at 5C / 40F. It's November, what do you expect?

Michael Jackson's physician, Dr Conrad R. Murray, has been found guilty of involuntary manslaughter through the administration of propofol to the singer. Propofol is an agent normally used in the operating theatre, and should be used with life-support machinery as it is a muscle relaxant. Using it outside the OR is at best irresponsible. However, in view of the high profile of Michael Jackson, I have this feeling that Dr Murray is being hung, drawn and quartered even before his guilty verdict. Dr Murray made a grave mistake by giving in to the incessant demands from MJ for something to put him to sleep. Using propofol was crass. Dr Murray should have been dealt with by his professional body, not through the courts. But who am I.

I have completed the transcription of tributes from the local paper for casualties from the Second World War from the year 1944. Only the year 1945 remains, and I hope to complete that in time for Armistice Day, this coming Friday.
Posted by ADB at 22:52 No comments: 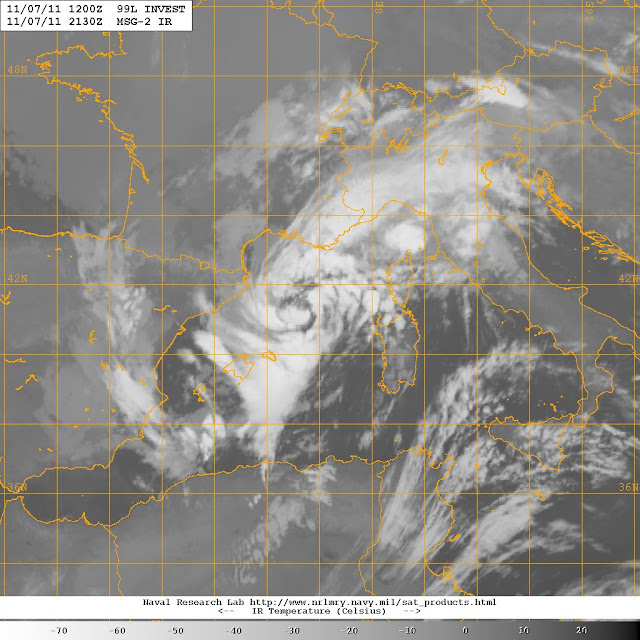 In the Mediterranean a depression between Spain and Sardinia, has been classified as a tropical disturbance. 01M (or 99L) is however unlikely to turn into anything substantial. The sea surface temperatures in that area of the Mediterranean (20C / 68F) are way below the threshold (26C / 80F) required for a tropical cyclone. However, the satellite picture does look suspiciously like a tropical system. Medicanes are not unheard of, certainly at this time of year when the waters are at their warmest.
Posted by ADB at 22:44 No comments: