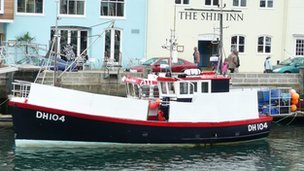 This boat is the Purbeck Isle, a small fishing craft that hails from Weymouth in Dorset. She left port yesterday, and has not been seen or heard of since. A search has been going on for the last 24 hours, but wreckage was located on the seabed in a location where previously there was nothing. Tonight, the body of a man was retrieved from the sea - it is believed to be one of the crew. His two comrades remain missing, but the worst is feared.

Stornoway too is a small fishing port, and not immune from tragedies like this. My thoughts are with the family and friends of those missing or lost in the English Channel.
Posted by ADB at 23:07 No comments: Links to this post

A reasonable day, with some good spells of sunshine. The day started with a little bird drama, when a gull with a broken wing turned up in the backyard. The SSPCA were called, but when they turned up the bird had disappeared. It most definitely could not fly, but it might have sneaked through the gap under the gate or the fence.

The Olympic flame has arrived in the UK, and over the next 70 days, it will be carried the length and breadth of the country. It will pass through Stornoway at 6.32 am on June 11th.

As I type this (9pm GMT), an Icelandair plane is circling 10 miles west of Keflavik airport in Iceland, dumping fuel and preparing for an emergency landing, because a wheel fell off upon take-off. Flightradar24.com shows the plane circling. Icelandic TV has a live, continuous feed from the airport; I don't understand Icelandic, but for a nation of 400,000, this is very big news. As it would be anywhere. The plane landed safely at 9.15pm local time there.