Hurricane Bill, 20 August 2009, 2045 GMT - 40 minutes ago. Winds of galeforce and higher extend a mere 260 miles / 420 km from its centre; hurricane force winds blow within 115 miles / 190 km from its centre. Bill is not likely to affect land at its current strength, winds of 135 mph, although Bermuda will feel its effects over the next day or so. The Canadian Maritimes can expect to see some of Bill's force in ameliorated form - although winds of 105 mph (offshore from Nova Scotia) are still no teaparty. Keep an eye on the NHC output and that of the Canadian Hurricane centre. The United States will not be directly affected by Bill, other than in the shape of extremely dangerous surf and life-threatening rip currents caused by high swell, generated by the hurricane, which will impact its entire eastern coastline. Please be careful when you go down the beach this weekend. Next week, Bill will come to visit Ireland and Great Britain as a vigorous depression.

For the moment, I'm content to watch from 3,500 miles away and admire the beauty in Nature's force from high above. Hurricanes are not monsters, they are a useful venting mechanism in the planet's redistribution of the sun's heat. Just keep out of their way if you can.
Posted by ADB at 22:22 No comments: Links to this post

The year is 1989, also 20 August. One hundred and thirty people are on aboard a pleasure craft on the River Thames in London having a party when the vessel was rammed by the dredger Bow Belle. Fifty-one of those on board the pleasure craft drowned in what was to become known as the Marchioness disaster, named after the craft. Read the article on the BBC website and remember the victims of this tragedy today, twenty years on.

The focus today is heavily on the release of the Lockerbie bomber, and I have just turned off coverage on BBC TV and Twitter, some 15 minutes after his plane took off into the cloudy skies above Glasgow. In 4 hours' time, he will touch down in Tripoli, Libya, to a hero's welcome. And apart from the man with the long name, a certain colonel will also be a hero. He has come back out of the cold, feted by the great and 'good' of the world now that he has become the best boy of the class.

The overwhelming sentiments of reactions on Twitter were negative, along the lines of "where was the compassion for his victims?" The repercussions will be heavily political, both inside and outside the United Kingdom. American reactions have been particularly vociferous - understandable, with some 35 students from a college in Syracuse among the dead of Lockerbie. As were 11 townspeople in Lockerbie itself. It still remains an eerie memory to see the wreckage of an aircraft strewn along the M74 motorway, which I know quite well, with the familiar roadsigns - and a big hole in the ground beside ravaged houses. 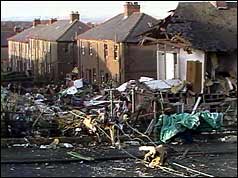 In death, all are equal, as I said before on a different subject. Megrahi, like any convicted criminal, deserves compassion and mercy when it becomes clear he has not long to live with a terminal illness. I support the Scottish Justice Secretary's stance on that, and on balance (60/40), that is my line. Also because I believe that Megrahi's was merely a scapegoat, to stand trial in lieu of dozens of other people who were in the know and who will never have to face justice over the 270 dead of Lockerbie.
Posted by ADB at 15:39 3 comments: Links to this post

This afternoon at 1.25pm, the Scottish Justice Secretary Kenny Macaskill announced that the sole person convicted of the bombing of PanAm flight 103 on 21 December 1988 is to be released from prison at Greenock on compassionate grounds. The bombing killed 270 people, both on the plane and on the ground in the town of Lockerbie, a small town in southern Scotland, some 60 miles southeast of Glasgow.

The finger of blame very quickly pointed at Libya, and it took 14 years for a man to be put on trial and convicted. The trial took place at Camp Zeist, Holland, but was, formally speaking, in a Scottish court. Abdelbaset Ali al-Megrahi was sentenced to life in jail, with a recommendation he serve at least 27 years.

A prisoner transfer was applied for between the UK and Libya, but actually rejected. Megrahi was diagnosed with prostate cancer, which was deemed to be terminal with a life expectance of about 3 months at the beginning of August. It is for that reason that he has been released.

Kenny Macaskill said he was aware of the pain and deep wounds and scars left by the Lockerbie bombing, but felt that compassion, although denied to Megrahi's victims, should be afforded to all prisoners, irrespective of their length of sentence.

As I type this, it is reported that Megrahi will be welcomed on arrival at Tripoli by Libya's leader, Col Gadaffi.

I support Mr Macaskill's view that compassion and mercy should be shown. I also support the victim's relatives views that justice may not have been shown to be served and that Megrahi should have served the rest of his life in prison.
Posted by ADB at 13:47 1 comment: Links to this post