Ardbheag and Lochresort
This article on the website of the Uig Historical Society shows pictures of a recent trip they did to Hamnaway, Ardbeag and Luachar - strange names of some of the remotest areas in Lewis and immediately adjacent Harris. It is still on my to-do list to walk to Hamnaway and Ardbeag (a distance of 8 and 10 miles from the road at Carnish).

Just like last Sunday, AIS is throwing a wobbly. The ship, the Arundo, is shown as sailing across the Harris hills. Wish I was there, I want to see this lol
Posted by ADB at 13:16 1 comment:

It's supposed to be summer, but you could have fooled me. Rain only a short distance away (oh, it just passed over) and more to come this afternoon. 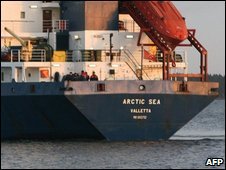 The Russian ship "Arctic Sea", shown above, was found off Cape Verde (West Africa) on Sunday, after being missing for more than 2 weeks. Its last sighting was off the French coast on July 30th, and it took the Russian navy a wee while to trace it to West Africa. Investigations are underway, and 8 people are under arrest aboard a Russian naval vessel under suspicion of piracy. This piracy is alleged to have started in the Baltic Sea, not exactly known as a hotbed for pirates.

Seven US Senators have registered their opposition to the intended release of Lockerbie bombing convict Megrahi from prison in Scotland. It would appear that the decision by Scottish Justice Secretary Kenny Macaskill will be his alone to take, and the signs are that the transfer to Libya could well be going ahead. It is my personal opinion that although Megrahi's guilt was proven beyond reasonable doubt in a Scottish Court of Law (sitting in Holland), he was put forward as a scapegoat or fall guy to take the rap for something that had the pawmarks of a certain colonel all over it.
Posted by ADB at 11:02 3 comments: