It is reported tonight that former BB contestant Jade Goody only has months to live, following a diagnosis of metastatic cancer - cancer that has spread. Her partner has proposed to her, and she is getting her affairs in order. You can only admire her bravery - I have never pulled any punches in the past in voicing my less than favourable opinion of this celebrity, but in a situation like this, I am prepared to alter my view.

On an equally gloomy note, I was reminded of Torvill and Dean's ice-dancing triumph in Sarajevo in the Winter Olympics of 1984. Their 4-minute routine to the strains of Ravel's Bolero has gone down in the history books, but in my mind, the name Sarajevo has become synonymous with brutality on a breathtaking scale in the early 1990s. One of its perpetrators, Radovan Karadjic, is currently standing trial in The Hague on an indictment of war crimes; number two, Ratko Mladic, is still at large.

It made me quite ill today to view a picture of a woman who had not cut her fingernails in 30 years. They had grown to a combined length of 28 feet (8.4 m) - and she lost them in a car accident. How on earth can you live with nails like this? 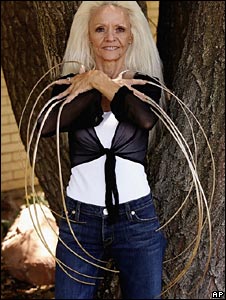 St Valentine's Day today (some suggest it should be St Raphael's Day, but who's fussing, not me), and I hope those looking for love find it coming their way today. Out in the Hebrides, we're going downhill slowly, with a few spots of rain on the window and a steadily strengthening southerly wind. The weather will remain changeable for the foreseeable future (what's new) as low pressure systems pass north of the British Isles, with trailing weather fronts bringing us rain. I should stress that we had hardly any snow worthy the mention, unlike other parts of Scotland. I'm certainly not complaining about the +8C on the thermometer this lunchtime.

A man who had become disoriented on the moors near the Pentland Road in the centre of Lewis was located safe and well during the night. As darkness fell last night, he contacted the Coastguard by mobile phone saying he had lost his bearing in mist and fog near the Pentland Road. Coastguard teams searched the area on foot during the night. Once the helicopter became available after a medical emergency near Inverness, its crew located the man by the light on his mobile phone at 2 am.

I have visited that part of Lewis several times on foot my self, but would not have done so yesterday. I took no pictures yesterday, precisely because it was drizzling. When I was doing long walks, back in 2005, I would venture out in all weathers - but not to the moors with visibility as poor as yesterday. However, fog and mist can catch anyone out, and I'm glad this person was finally located safe and sound. Just a few images of the area to indicate the terrain.