Another day like yesterday, although I should mention that it has grown rather colder than of late; daytime maximum temps are not much above 11C at the moment. Went into the library to scour the Stornoway Gazette of 1917 for tributes to those who fell in the First World War at the time. The month of January 1917 saw some very harsh weather in Lewis, with heavy snow and strong northeasterly winds.
I am continuing my transcripts of the Napier Commission's reports on Shetland, with a foray out to Foula, west of the Shetland Mainland.What remains is twenty submissions to be taken at Lerwick, from mainland Shetland and Whalsay.

Lone yachtsman Neil Mackenzie is still being sought near Arisaig, following the find of his yacht at Rhu on Thursday. The family have expressed their mounting concerns, after an all day search today in the area between Skye and Ardnamurchan yielded nothing.
Posted by ADB at 18:07 No comments: Links to this post

Quite a nice day in terms of weather, with spells of brightness following in the wake of early showers. Spent the afternoon transcribing the Hillswick section of the Napier Commission's report for Shetland. 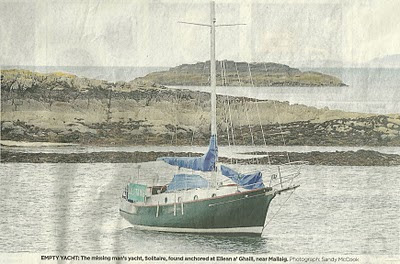 Down the West Coast of mainland Scotland, a search is continuing for a lone yachtsman, whose vessel (the Solitaire) was found abandoned at Rhu near Arisaig following an alert on Thursday. 59-year old Neil Mackenzie had not been in touch with his wife for a long period of time, contrary to previous habits. Mr Mackenzie was an experienced sailor, and the emergency services were out in force to look for him. (Image courtesy Press & Journal, photograph Sandy McCook) 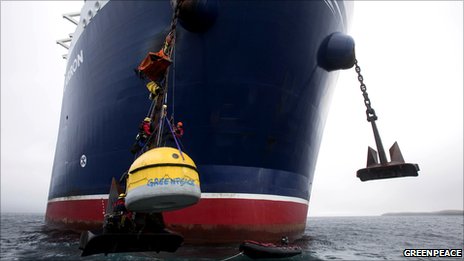 Greenpeace is mounting a protest on a ship which was set to leave for the oilfields of the Atlantic, west of Shetland. They have affixed a survival pod to an anchor chain, to prevent the Stena Carron from departing. Legally, logistically and practically it is very difficult to dislodge the protesters; it would appear that an imminent gale might be more helpful to end the protest.(Image Greenpeace, via BBC)

Posted by ADB at 17:52 No comments: Links to this post