Hurricane Maria struck the US dependency of Puerto Rico in 2017. Until very recently, the deathtoll was put at a risible 64. Today, this was upped to 2975. The damage is now quoted at an eye-watering $139 billion. Without wishing to compare suffering, the response to the devastation wrought by Maria jars with that to Harvey's devastation in Texas and Louisiana, some weeks earlier. It took nearly a year for full power to be restored to Puerto Rico, to but name a sore point.

This year's hurricane season, thus far, is quiet. However, the peak will occur on September 10th, and the season won't end until November 30th.
Posted by ADB at 23:40 1 comment: Links to this post

The hurricane in focus on 29 August 2005 was of course Katrina, one of the most devastating tropical cyclones to affect the US mainland in modern times. Although it had weakened prior to landfall in New Orleans, its impact was devastating. This entry is dedicated to the memory of those lost in that disaster, in New Orleans and along the Gulf Coast.

Posted by ADB at 23:36 No comments: Links to this post

Since 2015, the MV Loch Seaforth, has been on the Stornoway - Ullapool ferry route, and proven to be a reliable vessel that can handle the sometimes rough conditions in the Minch admirably. However, last Wednesday, 8 August, things went very badly pearshaped. Upon leaving Loch Broom, heading northwest towards Stornoway, the vessel started to slow down and one engine was shut down. This was due to a failure in the cooling system. The second engine also shut down, closely followed by a complete power failure. Toilets were out of action, no steering, no propulsion - for more than an hour. The master requested assistance, and the lifeboats from Lochinver and Stornoway both raced to the scene to stand by. The Coastguard tug Ievoli Black was also contacted, but her services were not needed in the end, as the ship's engineers managed to get her underway again at 12 knots (as opposed to her customary 19). The lifeboats shadowed the ferry into Stornoway, where Loch Seaforth arrived three hours late, at 3.45pm. 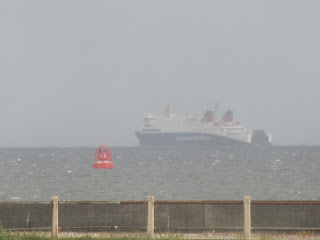 What followed were repairs, seatrials in the early evening and a resumption of services at 10.15pm. Although the Loch Seaforth is quite capable of making up for lost time, making up six hours is a tall order. As I type this, on Saturday afternoon, she is still three hours behind. It is only the absence of a scheduled freight service tonight that will allow a resumption of normal service tomorrow. This has had a substantial impact on tourist traffic, freight traffic (which Loch Seaforth carries at night) and everybody's travel plans. Bus company Citylink has had to put on special coaches to carry people at the abnormal times. However, all will be back to usual on Sunday. Phew!