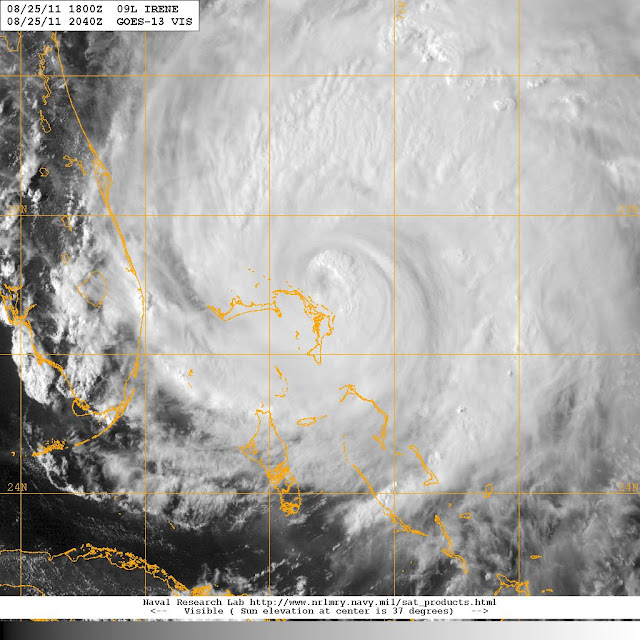 Libya: when will people stop selling the hide before the bear has been shot? Gaddafi is still at large, and until he is apprehended or killed, this mayhem will continue.

It's been a nice sunny day here in Stornoway, but it started rather cold: 6C at sunrise. We quickly made it up to 17C by lunchtime, which has been the norm this week. Over the weekend, we are on warning for a four-letter word. You know: a gale. Autumn is only just around the corner.

Got two more postcards from Postcrossing users, this time from Germany and Holland. Can thoroughly recommend it, doesn't need to cost you an arm and a leg.
Posted by ADB at 21:48 No comments: Links to this post

Hurricane Irene is presently moving through the northwestern Bahamas, en route for the Carolinas. Beyond that, the storm will parallel the east coast of the USA towards New York and New England. Although it is expected to be weakening at that point, Irene's impacts will be felt over a wide area. At the moment, winds of 40 mph or higher occur within 290 miles of the centre of the hurricane.
Posted by ADB at 16:14 No comments: Links to this post

Spent today monitoring hurricane Irene, which is passing through the Bahamas with winds of 110 mph, and the situation in Libya. Gadaffi has been kicked out of his compound, but fighting continues in Tripoli and elsewhere. Next Thursday, 1 September, would have been the 42nd anniversary of his coup, back in 1969. Let's hope he takes it as a cue to formally relinquish power. Sigh, was that me dodging a flying pig?

I have also added more information on a tribute blog that I have set up for one casualty of the First World War, who perished in the sinking of the SS Kenmare off Holyhead in March 1918. His body was washed up north of Dublin, Ireland, a few days later. I am working with a man from the area to find out as much as possible about this incident, and the results will go on this blog. John Macaulay hailed from the village of Islivig, 40 miles west of Stornoway. This image, taken two years ago, shows the village road. Posted by ADB at 12:44 No comments: Links to this post