Over the past 6 months, the screen on my laptop has been showing increasingly interesting colour schemes, which bear little resemblance to what the computer part of it has been putting out to it. After doing a few DIY diagnostic tricks, it turns out to be a hardware fault. Screens on laptops are prone to break or fail, so I went onto Amazon and ordered a replacement LCD screen. This arrived in the mail this morning, so I sat down and took the screen part to bits and installed the new LCD. You can well imagine the sinking feeling when I switched the laptop on afterwards - only to be greeted by a mitigated version of the same bl**dy fault.

As regular readers are aware, I have been going on dozens of flights over the past 21 months (a journey to Amsterdam involves three flights) and I had my laptop in my case - which goes into the hold. Hold luggage is subjected to a frightful battering, and I suppose something has been damaged at some stage.

I'll have it fixed at some stage, but it's not a major problem. I fortunately have the use of an external screen - which allowed me to ascertain that it was the screen going wonky.
Posted by ADB at 23:36 3 comments:

The sun set a quarter of an hour ago, but not in the blaze of glory we had yesterday evening. A light shower passed by just at that moment.

The US are all preoccupied with their snow storms, so much so that a hurricane-related blog is talking about nothing else. Bit of a disappointment, if they miss that steady procession of hurricanes in the South Pacific: Oli, Pat and now Rene. The Pacific is certainly not living up to its peaceful name.

In Scotland, the Deputy First Minister (Nicola Sturgeon) is under political fire after she wrote a letter to a court on behalf of a constituent who has been found guilty of fraud. Again. Having been imprisoned in the 1990s for stealing benefit cheques whilst a postmaster, the suspect has now been claiming £80,000 in benefits he was not entitled to. As a member of parliament, Ms Sturgeon can expect to be called upon to write letters on behalf of constituents in circumstances as described above. Whether it is wise to do whilst holding a senior position in the government of the day is questionable. Ms Sturgeon will explain herself to the Scottish Parliament on February 24th.
Posted by ADB at 17:36 1 comment:

Nice day with increasing amounts of sunshine. Temperature +7C, which is quite decent for this time of year. If you have snow, please take care.

I'll make a longer post later, but want to display this expression of team support on a website displaying information on tropical weather. At the top, it says: NOTE: AMSR-E data back in sync, WHO DAT!!!! 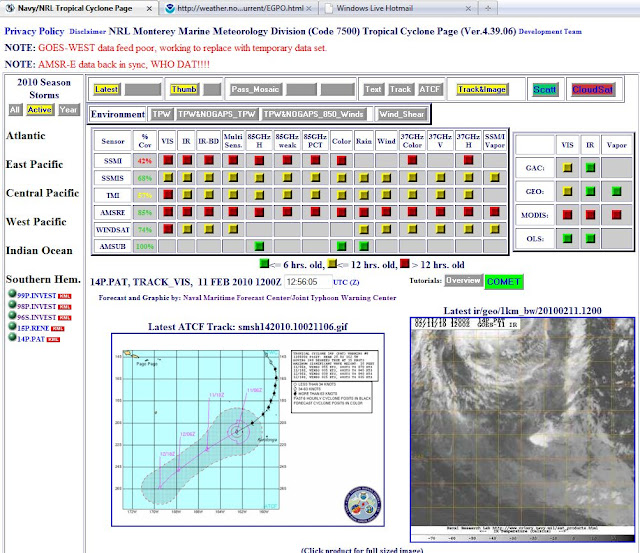