No offence intended
The Roman Catholic Church has taken a battering in recent months, particularly after priests in the Irish Republic were found to have been involved in child sexual abuse over many years. And not just in Ireland either. So it will not come as a major surprise that the authority of the Church has suffered a decline.

However, rather than indulging in a spot of introspection and recognising that there is some truth in the phrase "mea culpa", the Vatican has decided that investigators need to be sent to Ireland to reassert its authority and reestablish the standing of the Church in everyday life. Liberalism is to be stamped out at every cost. See this article in the Irish Times.

In 1984, I was invited to a lecture by some followers of the strict Jesuite order Opus Dei, with the object of converting me to Roman Catholicism. It managed to convince me that Roman Catholicism is not for me. I cannot accept that the Pope is infallible, for a start. He is a man, very much like every other of the 3 billion males of the species. As are each and everyone of his priests, as shown with the child sex abuse scandals - I condemn the sexual abuse of children in the strongest possible terms by the way. I feel that Pope Benedict XVI has made a serious error of judgment in slapping down on "liberals", rather than acknowledging that the Church made mistakes and working towards change.

Not being prepared to embrace change places the Vatican in the same league as the dinosaurs. Heading headlong for extinction.
Posted by ADB at 20:58 1 comment:

A brilliantly sunny day, with a cool northeasterly breeze. The mercury topped at 15C, but the sun kept it nice and warm. Apart from sitting in the sun, I also made good progress with my transcription of Canadian servicemen who originated from the Isle of Lewis. Their total has now crept above 700. I have about 40 left to do, and hope to complete the listing by the middle of the week.

During last Wednesday's deadly shootings in Cumbria, police officers saw the man actually shooting people, but were powerless to act. Specialist fire arms constables were immediately summoned, but at no time did the unarmed officers have opportunity to stop Derrick Bird.
> For the benefit of my American readers, British police are NOT routinely armed. 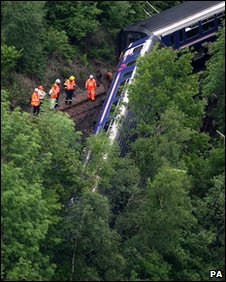 A train was derailed in the West Highlands last night, when the 6.20pm from Glasgow Queen Street to Oban hit boulders on the track near Falls of Cruachan station. The rocks are presumed to have come down in a landslip, but caused the train to leave the tracks. A fire broke out in the front carriage, but nobody was safely hurt. The driver led his passengers to safety as soon as the train had come to a halt, perched precariously 50 feet above the A85 road below. Picture courtesy BBC.
Posted by ADB at 20:41 2 comments:

As promised, a few pictures of Sunday's foray to Uig. The boundary between cloud and sun Valtos Beach from a hill above Kneep Beach