Quite a blustery and showery day, with even some hail thrown in for good measure. Cars here in Stornoway are all covered in a thin layer of ash (if the rain hasn't already washed it off). The ash, from the Grimsvotn volcano in Iceland, has stopped all air travel in Scotland. Planes in Orkney and Shetland were found to be covered with a layer of ash as well. An echo of the disruption from April last year (the below picture shows some of the ash on a car roof). 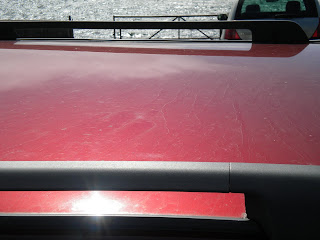 The high winds have caused havoc on the mainland, but these islands did not get off scotfree either. A lorry overturned off the A859 Tarbert to Stornoway road, about 7 miles north of Tarbert. The driver was airlifted to hospital in Stornoway with serious injuries. Judging by the state of his cab, shown on TV images, he is lucky to come out of that alive.

Local people were alerted to a scam letter, where the residents of a house were advised that a relative, named Gilbert [surname of resident], had died in China, leaving $9,8m. And of course you have to email, fax, write to some dodgy address in Hong Kong to claim your cut. I'm used to seeing that c**p in email, it does not regularly turn up here. 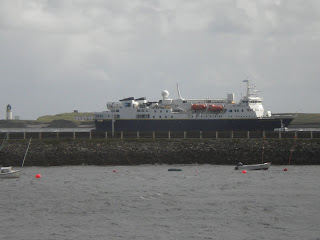 Cruiseship NG Explorer, entering port this evening
Posted by ADB at 15:00 No comments: Links to this post