Tropical storm Don is moving across the southern Gulf of Mexico and will make landfall in central Texas in the early hours of Saturday. The exact location where it will come ashore is as yet uncertain. Don is not expected to be at hurricane strength, due to unfavourable atmospheric conditions, but the winds near the centre could be up to 55 knots, which equates to force 10 to 11 on the Beaufort scale.

This is a summary of warnings and watches, which are being updated every 3 hours on the NHC website. Please refer to that source for up-to-date information - this post is only a heads-up.

A storm surge of 1 to 2 feet above normal tidal levels will occur near and to the east of the point of landfall. This is likely to be accompanied by large and damaging waves.

Rainfall totals of 3 to 5 inches, locally up to 7 inches are possible from central Texas into south central Texas.
Posted by ADB at 17:29 No comments: Links to this post

A nice warm, sunny day, which saw the mercury up at 21C / 70F at 2pm. We were even able to sit outside in the sun and have lunch, after which I cut off bits of a tree which were impinging on the suntrap where we sit. By late afternoon, cloud moved across from the west and rain followed in the evening. It remained dreich and wet all evening.

I finished the transcription of the Napier Report for Poolewe in Wester Ross, and as of tomorrow, I'll be heading south in the transcripts, to Shieldaig. After that, only Balmacara and Dingwall remain in the Ross-shire transcripts.

There were a number of unusual boats in today, such as the survey vessel James Clark Ross, which hovered just south of the Arnish Lighthouse before heading away again. The yacht Northern Spirit is anchored in the shipping channel off Goat Island. A vessel with brown sails also put in an appearance. Although Stornoway is not a busy port, there is sufficient traffic in summer to keep the interest going. 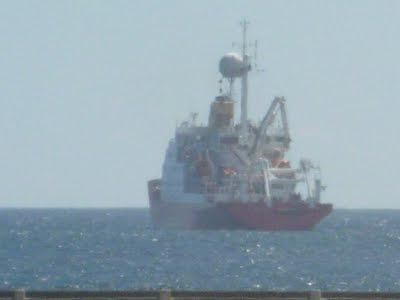 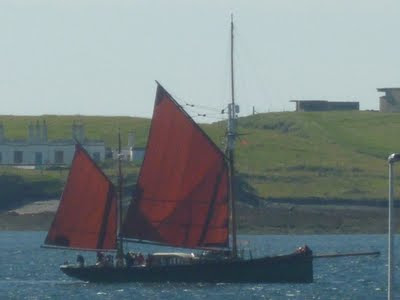 Posted by ADB at 12:23 No comments: Links to this post