A Tornado jetfighter has crashed northwest of Rubha Reidh lighthouse, 18 miles southeast of Stornoway. Two crew ejected and were recovered from the water by Coastguard helicopter, and flown to hospital in Inverness. RNLI lifeboats were launched from Stornoway and Portree. Coastguard tug Anglian Earl is on the scene of the crash to try to recover the wreckage - as shown on this image from AIS Minch.

It's ironic that there is a vigorous debate over the closure of Coastguard Stations, and of the RAF base at Lossiemouth, where the Tornado was based. 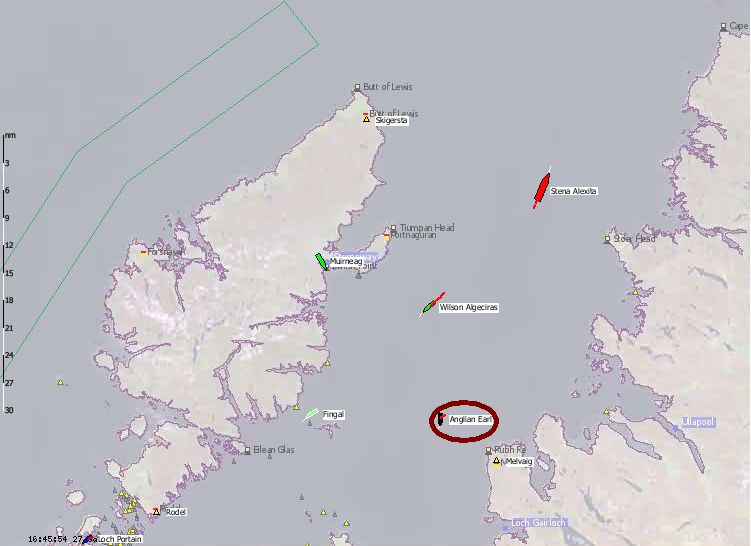 Today it is 66 years ago since the infamous Auschwitz Birkenau concentration camp was liberated by Soviet forces. More than a million people, mainly Jews, were killed there during the Second World War. The process was conducted as an industrial process. To date, some of the goods left behind by the victims of the Holocaust remain on display. These include suitcases with name tags, spectacle frames, hair and shoes. I have never visited Auschwitz and am not likely to. January 27th is Holocaust Memorial Day, remembering all the victims of the Nazi's policy of extermination of all those they considered to be sub-human. We must never forget.
Posted by ADB at 12:13 2 comments:

An overcast and cold day, although it has stayed dry.
Scottish politician Tommy Sheridan, who once headed the Scottish Socialist Party, has been sentenced to 3 years in jail for perjury. He lied under oath whilst fighting a defamation case against the Sunday tabloid News of the World which had alleged that Mr Sheridan had visited a sex-club in Manchester. The trial was a sordid affair, and I could not get over that Monday evening news bulletin on Radio Scotland, last November, when a list of people was read out who had had sex with each other.

Sordid is the word to describe the News of the World, which is gutter press at its worst. I was positively astonished that British prime minister David Cameron appointed a former editor of that rag to be his communications advisor. Do you know why he needs somebody like that? Mr Cameron has been educated at Eton (a private school for the very privileged) and therefore hasn't got a clue what goes on for Johnny Average. Anyway, Andy Coulson got sacked over allegations over phone hacking / tapping, that his journalists are said to have carried out over the years. Some of their alleged victims are high-ranking politicians like former PMs Gordon Brown and Tony Blair.

Sordid is also the saga around two sports commentators, who were caught on microphone as saying that a female linesman at a soccer football match would not know the off-side rule, because she was a woman. The person concerned to be a very capable linesman at a Premier League football match. It got worse, when one of the commentators was seen asking a female production assistant to tuck a microphone into his trousers, and discussing (on camera) a woman, in such language that the broadcaster concerned would not show us anymore. Although one of the men concerned has apologised to the linesman, the other would only offer his excuses over his contribution to the furore, not over his language or his attitude to women.
I thought we had come a long way in society with regards to sex discrimination, bearing in mind that women now get to high positions just as easily as men. I am even more disgusted with football than I already was now that I see this rampant sexism coming into the open.
Posted by ADB at 12:11 No comments: