A few weeks ago, I attended the funeral of a local friend. The lady in question was only 55, and although I was aware of long-standing health problems, her death came as a shock. What came as an even bigger shock was the funeral. The attendance was close to 1,000 which did not fit into the building of the Free Church Continuing in Sandwick. The deceased had been a pillar of the local community, being active in all sorts of roles. She was a well-liked and respected figure, so the fleeting, single reference to her name was took my breath away. That was the only time she was referred directly. In certain parts of presbyterian Scotland, when you have died, the remains have to be put in earth - the soul has departed. Until recently, graves were hardly if ever revisited. I don't want to appear disrespectful - it is one of my cast-iron principles to live and let live - but it rather jarred with the personality of the deceased.

I am aware I have now published two posts on the subject of death, so I'll try to change the topic. 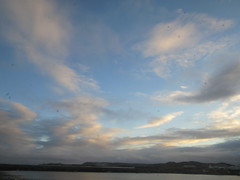