A cold, windy and unpleasant day out here. Although the mercury is at 6C, it is icily cold outside. Worse conditions exist on the mainland, where heavy snow is wreaking havoc on the roads in the Highlands. Ten lorries were stuck on main roads overnight, although they have now apparently moved on again. White-out conditions were reported from the A835, Ullapool to Garve, road at 10 o'clock this morning. The webcam just outside Aultguish Inn, near the top of the moor, showed this image a minute ago. 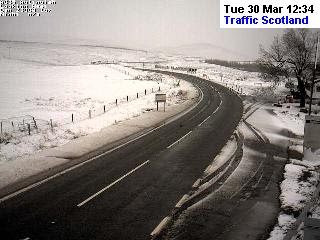 No, don't think for one minute that the end of March means the end of winter. It can still be quite nasty.

My postings on Norman Morrison relate to a project called In from the Cold, which aims to afford the proper remembrance to those servicemen who are not recorded on the Commonwealth War Graves Commission's registers. It is not an easy process, as all due information has to be supplied. Quite often, this is just plain not available. Neither do all men qualify who died during the First World War, even if they were on active service.
Posted by ADB at 12:51 4 comments: