An overcast day, but mainly dry. A cool breeze but not too cold altogether. The cruiseliner Sea Cloud II, a three-masted sailing ship, made a magnificent entry into Stornoway at lunchtime. The ferry also came in, just as she was docking. The Sea Cloud II departed at dusk. I went to an open-air meeting related to the Scottish independence referendum, which will be held on September 18th. Jim Murphy MP, for the No campaign, held a soap-box discussion with (what appeared to be) mainly supporters of his cause. He commented how nice people were, even those driving by with a Yes flag out of the window kept in 2nd gear and stopped at the lights to let people cross the road. In Glasgow, the air would have been blue and it would have been a noisy, heckling affair. 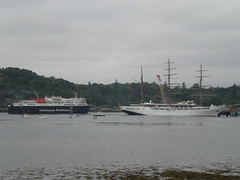 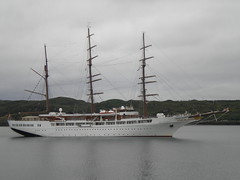 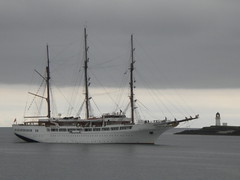 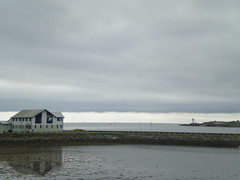 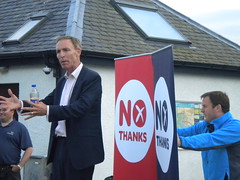 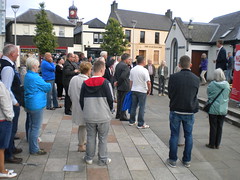 Posted by ADB at 10:40 No comments: Links to this post

Back to normal for these parts - overcast but fairly bright, and occasional light showers. 17C on the thermometer, and light winds.

Anyone else felt the opening ceremony for the Commonwealth Games last Wednesday was the most excruciating, embarrassing, toe-curling load of tat ever shown on British television? I was expecting something along the lines of the Olympics or Winter Olympics opening ceremonies, but not a collection of off-key singing papier-mache has-beens making a total mockery of Scotland. End of rant. 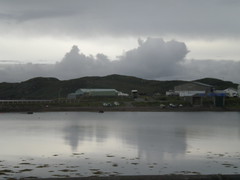 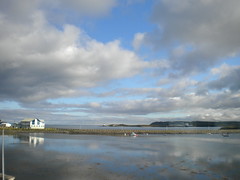 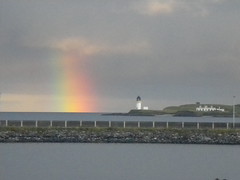 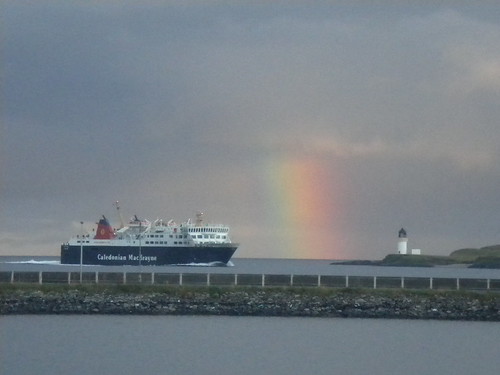 Posted by ADB at 10:26 No comments: Links to this post

This is the Outer Hebrides, so it's tipping it down with rain this afternoon after several days of temperatures well above 20C. We are now sinking back into 'normal' territory, 17C / 63F. Raining steadily in Stornoway, the supermarket was full of people in summer garb, covered in wet-weather gear. Nobody comes to these islands not prepared for rain at some juncture.

NOS.nl reports that Dutch police experts have not been able to reach the crash site of ‪#‎MH17‬ today due to heavy fighting in the area. Two experts were able to access the area yesterday, accompanied by pro-Russian separatists. The last coffins with remains that were recovered from the crash site have arrived in the Netherlands. The first body, taken to Holland from the crash site of ‪#‎MH17‬, has been identified. Only the next-of-kin and the mayor of the municipality concerned have been notified of the identity of the dead person, who was Dutch.

We had a cruiseliner in, the Delphin, anchored in the Glumag. Pity about the weather, but that can't be helped. 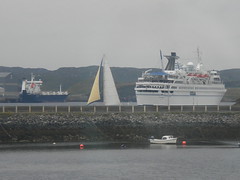 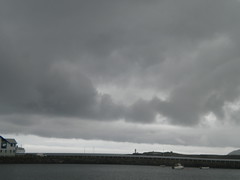 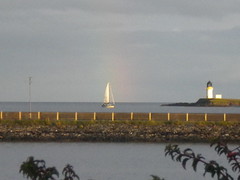 Posted by ADB at 10:24 No comments: Links to this post