It is a hundred years ago today that Belgium and the United Kingdom joined the First World War. Belgium was invaded by German forces, who met with stiff resistance at Liège - the Eben-Emael fortress  proving to be a tougher nut to crack than the Germans had anticipated. History has recorded the events that followed over 4 years, 3 months and 7 days, claiming the lives of millions, and reshaping the map of Europe.

It left a legacy, consisting of all the ingredients for another conflagration, which followed just over 20 years after the First World War ended. In turn, the Second World War left its own legacy, which is continuing to reverberate in the world today. The Gaza conflict, as we are watching it on the TV news these days, is a direct offshoot of WW2.

Is it proportionate for the murder of three teenagers to be avenged by the summary justice of the demolition of a house, and the murder of another teenager? I condemn the use of missiles to terrorise the civilian population, even though this has not claimed lives. I roundly condemn the disproportionate use of force by the Israeli Defence Force. They state that missile stores and launch sites in Gaza need to be destroyed, and in a sense, such is a justified aim. However, the civilian death toll is way, way too high. It could be argued that Hamas, in a cynical way, place their weaponry close to civilian sites - almost inevitable in Gaza. But three times over now have we seen the targeting of United Nations schools by IDF, shortly after being notified by the UN of the location of these schools. That too is a cynical approach, and comes close to deliberate targeting of such sites. There is no trust between either side, and there is no prospect of a lasting resolution.
Posted by ADB at 16:09 1 comment: Links to this post

After a very rough night, the northeasterly wind took its time to abate from the force 7 it had been blowing at through the night. Cloud broke by midday, and it became quite warm and muggy - resulting in a large thunderstorm out at sea at 3pm. 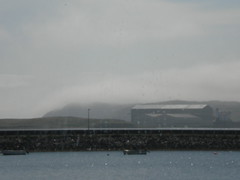 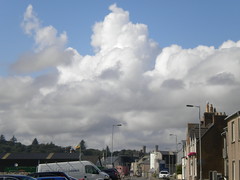 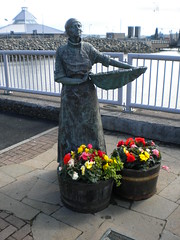 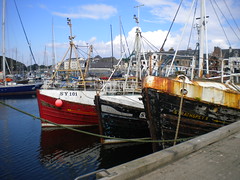 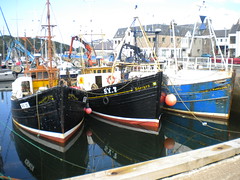 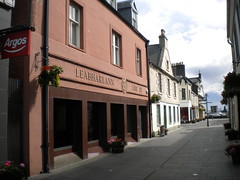 Posted by ADB at 12:44 No comments: Links to this post

Although the day did start bright and fairly sunny, the wind soon picked up and the cloud cover closed down the sky. The mercury has dropped from 17C around midday to 15C at the moment. For the moment, I do not expect rain, but the rainfall radar shows a band of quite heavy rain from Mallaig towards Northern Ireland. This will probably come our way through the night, according to the Met Office. Wind and rain duly arrived late in the evening, something we haven't seen to this degree for a while.

Bright afternoon here in Stornoway, but I'm not too confident we'll get away without a shower. The Dutch sailing ship Wylde Swan has just come into port - she featured in the Stornoway Tall Ships event in 2012. The vessel was crewed by, among others, 17 students from the Nicolson Institute, who had joined it at Bergen, Norway, for some experience in sailing a traditional sailing ship. 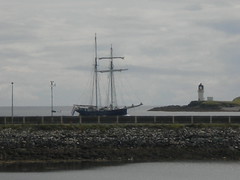 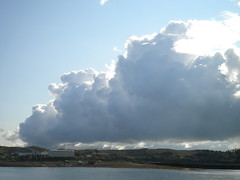 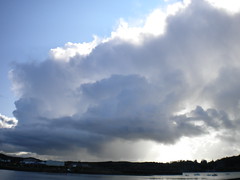 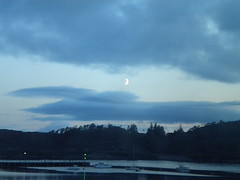 Posted by ADB at 12:40 No comments: Links to this post

Just found out that the Island Blogging site has been pulled, without prior warning to users like myself. I can understand a lack of funding, I cannot understand rudeness like that. I did manage to salvage my Island Blogging blog Arnish Lighthouse. Archived for posterity on Blogger. 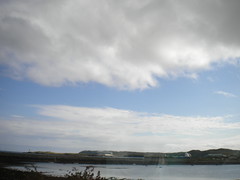 Posted by ADB at 12:39 No comments: Links to this post

A thorougly Hebridean day of mixed fortunes, with the sun taunting us from amongst drizzle bearing clouds. The mercury is shying away from 60F, which doesn't make the breeze feel any warmer.

You may think "what's the fuss over 20 jobs", but Harris is a fragile economy, and 20 jobs in a community of only a little over 1,000 is massive. It would equate to 17,500 jobs being lost in the city of Glasgow in one fell swoop.

Sheep poo galore at our monuments and memorials, according to this letter writer. The only thing is that Callanish, Doune Carloway and Holm are crofting townships, and the monuments concerned stand in common land, on which sheep do graze. And they, like all creatures, well, :poop:

There are roadworks outside, related to a faulty electricity cable. 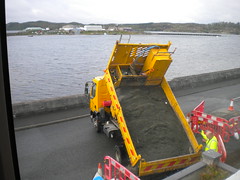 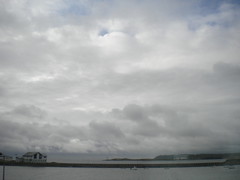 Posted by ADB at 12:38 No comments: Links to this post

Quite a nice, fairly bright day, so I went for a walk around town. Local primary schools have made up large roadside boards on the occasion of Homecoming Scotland 2014, Tattoo Hebrides (August 9th) and the Commonwealth Games, which are being held in Glasgow at the moment. They always make a colourful sight round town. 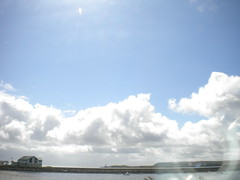 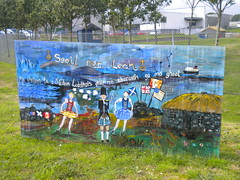 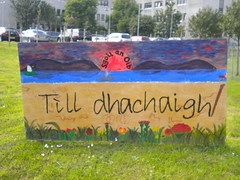 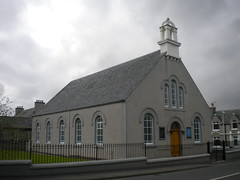 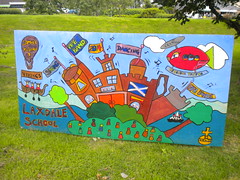 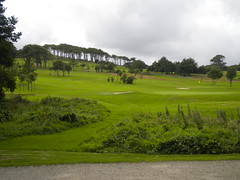 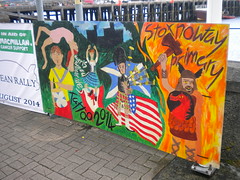 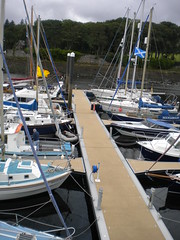 Posted by ADB at 12:35 No comments: Links to this post