A beautiful, sunny day, with not a cloud in the sky. The high-level clouds hardly registered. We reached 20C / 68F this afternoon, a respectable temperature for this part of the country. In other words, time for sitting out in the sun. The midges were present - out of the sun. Got my new box of pencils out, but nothing to show for it yet. In the past, I used to draw a fair bit, but not of late. I find drawing using a computer-mouse way too cumbersome. The box was cheap, £3 for 36 pencils, at B1 hardness. They feel harder than that. Once I've completed a drawing of sorts, I'll scan it in and post it on the blog.

Hurricane Earl is now approaching the US East Coast, so please call round at the National Hurricane Center's website for advice.

Typhoon Kompasu has wreaked havoc in South Korea, and three people have died in Seoul. Tropical storm Lionrock, having made landfall in China, has added to that country's woes with flooding this summer. More info on this BBC article.
Posted by ADB at 23:36 1 comment:

A tribute and account of the fate of Leading Deckhand John Macaulay.

John Macaulay was lost when SS Kenmare was torpedoed in the Irish Sea on 2 March 1918. He came from the village of Islivig in the district of Uig in Lewis. His remains turned up on the east coast of Ireland, north of Dublin, and lie buried in a grave in Balrothery. His grave is marked by a Commonwealth War¬graves Commission headstone.

This tribute is dedicated to his memory, and endeavours to tell the story of SS Kenmare, the German submarine U-104 which fired the fatal torpedo and John Macaulay’s final resting place.

John’s family history
John was the son of fisherman Donald Macaulay of Islivig and domestic servant Margaret Macaulay who were married at Miavaig on 4 April 1878. Both were aged 26 at the time. It is worth pointing out that in the Gaelic community, the name Margaret is sometimes converted to Peggy. They continued to live in Islivig after their marriage. Donald and Peggy were blessed with the birth of a son, John, on 7 December 1881. It has not been part of my investigations to find out whether they had any more children.

Thirty-six years later, on 16 January 1917, John (now living at 7 Islivig) was married to Catherine Ann Macaulay, a 29-year old nurse from 19 Brenish. She is the daughter of boat-builder John Macaulay and Isabella Matheson. The marriage was conducted at Seaforth House on Scotland Street in Stornoway.

By that time, John’s mother Peggy had died, and Donald, by that time aged 62, was a crofter. His son, John, was a seaman in the Merchant Service, but (1917 being a war year) also marked as being in the Royal Naval Reserve, as so many islanders were.

S.S. Kenmare
[A picture of the ship previously published at this location turned out to be that of a different vessel by the same name]
The Kenmare was launched on 16 February 1895 at Wigham, Richardson and Co. of Newcastle upon Tyne. She was powered by a triple-expansion steam engine, generating 437 hp. She was completed for the City of Cork Steam Packet Co. Ltd. Her dimensions were 264.5 x 36.5 x 16.9 feet, measuring 1,346 gross tons.

During the First World War, she found herself under attack by German submarines (U-boats) on four occasions. On 27 June 1915, SS Kenmare was attacked by gunfire off Youghall, but outran her attacker with minimal damage. Two years later, on 21 October 1917, Kenmare was off Holyhead, bound from Liverpool to Cork, when a torpedo passed only a few feet from her stern. A few weeks later, the Kenmare had to fire at a submarine that was chasing her. However, the last attack, on 2 March 1918, proved fatal.

That day, SS Kenmare was sailing from Liverpool to Cork with a general cargo at position 53°40’095”N 5°06’099”W. This is 60 km (approximately 35 nautical miles) northeast of Skerries, Co Dublin. At around 7pm, U-104 fired a torpedo without warning. It inflicted severe damage, and Kenmare sank by the stern within two minutes. Only one lifeboat was serviceable, and the three who had managed to get into it tried to find other crew members. Three more were saved. In spite of shouting being heard, the occupants of the lifeboat did not manage to locate these unfortunates as it was dark by that time and the sea covered in wreckage. Twenty-nine members of crew perished, 24 of whom were in a boat which overturned – the weather being poor and the sea rough at the time. The First Mate, four crewmen and one gunner (RNR man Joseph Broughman, aged 20) survived the torpedoing of the ship. This was remarkable, bearing in mind that the ship sank in just two minutes. Two other gunners, A. E. Aston and John Macaulay, did not survive. Apparently, the ship’s gun had been thrown from its mountings by the force of the explosion. The survivors were picked up by the steamer Glenside the next morning, and taken to Dublin.

Postscript
U-boat 104 had been in service for only five months at the time of the attack on the Kenmare. U-104 sank a total of eight ships, which accounted for a third of the number of ships (25) sunk by its commander, 32-year old Kapitän-Leutnant zur See Kurt Bernis, until he was killed in the sinking of his U-boat on 25 April 1918.

On 23 April 1918, U-104 was attacked by USS Cushing using depth charges. These damaged the submarine. Two days later, HMS Jessamine came across the submarine on the surface in St George’s Channel as its crew were attempting to repair the damage, caused by the depth charges. KLt Bernis dived his submarine, but depth charges from HMS Jessamine forced him to surface. The U-boat was finally sunk, taking 31 to the bottom with her. Ten sailors were left in the water, after their vessel went down, of whom only one was picked up by the warship. The other nine were left to drown in the sea.

Found in Ireland
John Macaulay was not saved from the sinking of the Kenmare. Although the one working lifeboat remained on the scene as long as possible, the shouting of the floundering seamen ceased after some 10 minutes. It is a matter of conjecture what happened during the next fourteen days. 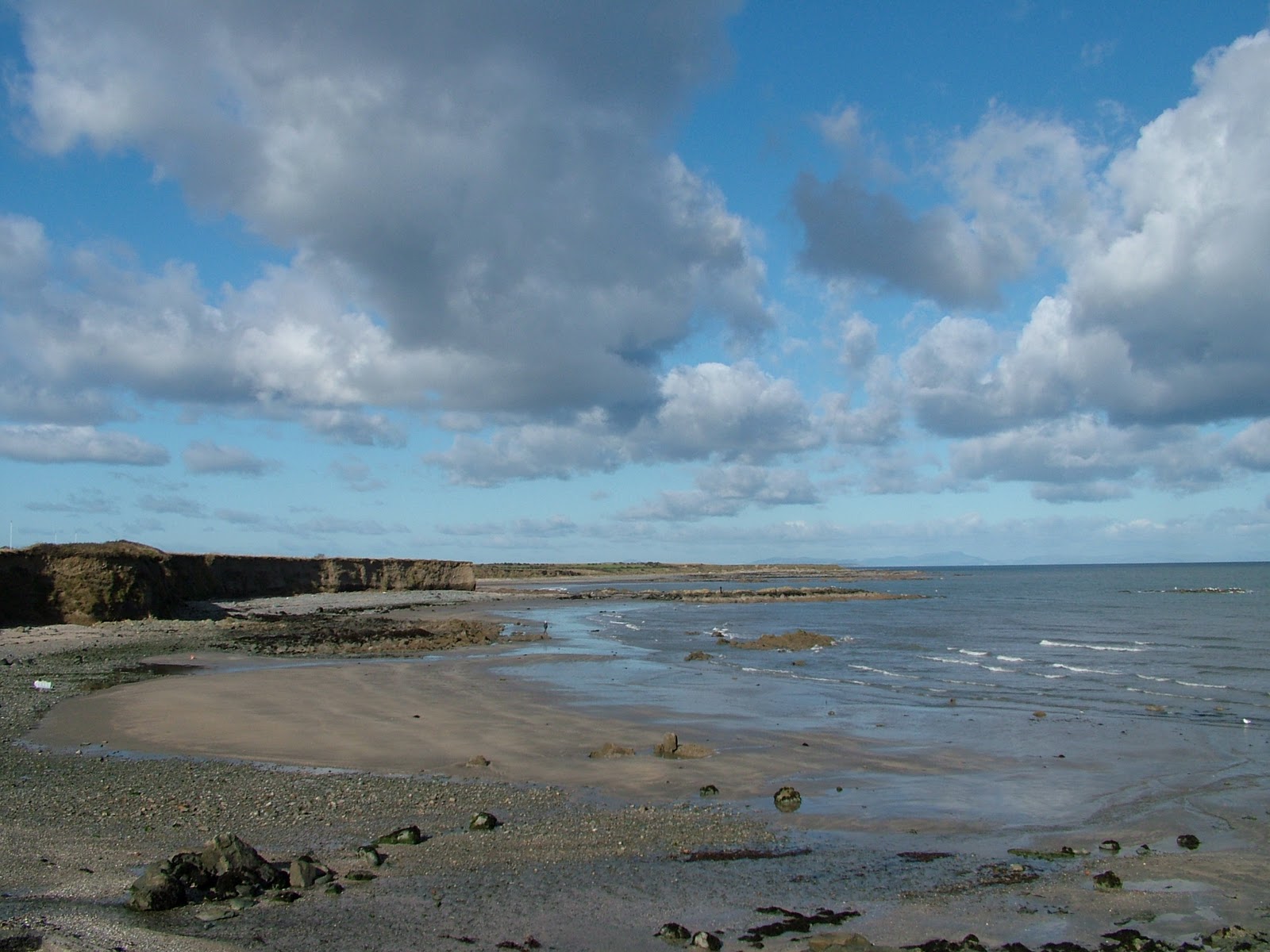 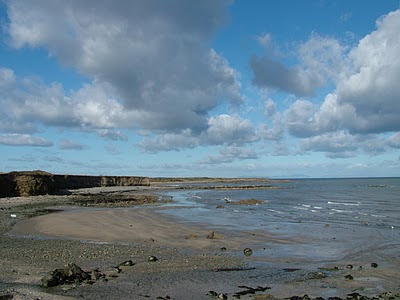 Coast Watchman John Doherty and Constable Masterson found the body of John Macaulay on a beach at King’s Point (shown left) on 16th March. Two other bodies turned up on nearby beaches at Skerries and Gormanston, but only John Macaulay’s body could be identified. He carried a letter which is said to have identified him as George [sic] Mcauley of Stornaway. He is described as a fine young sailor of about 25 – however, at the time of his death, John Macaulay was actually aged thirty-five. All three were dressed in semi-naval uniform.

Inquests into the deaths of the three naval were held by Coroners Friery and Corry, and the evidence disclosed nothing further than that two of the men carried beads and scapulars, while a disc showed that McAuley was a Presbyterian. The bodies, which were only a few days in the water, bore no sign of violence, and the medical testimony was that death was due to drowning. A verdict of “found drowned” was duly returned by the Jury under foreman Mr George Mongey.

News found its way to John’s native Isle of Lewis, and was relayed by local weekly newspaper Stornoway Gazette, on 15 March 1918.

“It is with deep regret we have to record the death by drowning of Seaman John Macaulay (Iain Dhomhnaill an Taillear) [John the son of Donald the Tailor] Islivig on Saturday 2nd inst. His boat the “Kenmore” [sic] was torpedoed, and only six out of a crew of thirty-five were saved. John was one of the finest young men that could be met in a day’s march. To his young and sorrowing widow, and to his other near relatives and friends, the heartfelt sympathy of the whole community is extended in their very sad and sore bereavement.”

John’s mother had endeavoured to have the body transferred home, but the authorities would not sanction this. An account of the funeral was forwarded to his parents by the Acting Divisional Officer of Coastguard at Rush, and the Stornoway Gazette copies this; I insert additional information as supplied by the Drogheda Independent and Drogheda Advertiser in their editions of March 23rd, 1918. 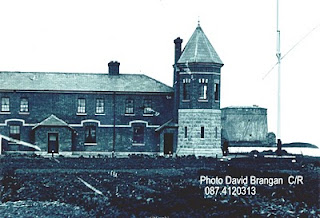 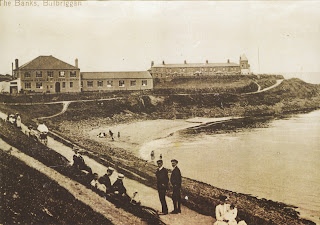 The funeral started from the Coastguard Station, Balbriggan (shown left, about 1920). The military supplied four horses and the coffin was place on the timber, and we marched through the town of Balbriggan. The military firing party, with a piper at its head, led the procession; a military funeral party and a body of police followed behind the coffin with as many of the Coastguard as could be obtained; and a large crowd of the inhabitants followed to the churchyard. the piper played a lament and other Scottish airs suitable for the occasion. (Pipers’ Band of the Royal Engineers playing the Dead March) The military also took photographs of the funeral and if they turn out successful you will be sent copies. Your son is buried at Balrothery Churchyard, and the funeral service was carried out by the Protestant minister (Rev. H. B. Good, Rector, Rev. C. Benson L.L.D. and Rev. R. Scriven). Your son was given the grandest funeral that was ever seen in Balbriggan and I think it is particularly gratifying to know that full honours were paid to his remains. Three volleys were fired over the grave and the piper played between each volley.”

Postscript
It would stand to reason that such a grand occasion would be remembered for many years to come in a small town like Balbriggan. Not in this instance. British armed forces burned and looted the centre of the town on 9 September 1920 in reprisal for an assault in a pub on one of their members. This would have eclipsed if not erased the burial in the collective and popular memory of the inhabitants of the town.

In the 1930s, the Commonwealth War Graves Commission commissioned the erection of a grave-stone over John Macaulay’s grave at Balrothery, a gravestone which faces east. His was one of many such gravestones in Ireland that were put up by the Office of Public Works, a branch of the Irish Government. In the 1920s, the family ordered the installation of iron railings around the grave site. The spelling of John Macaulay’s name on the gravestone (Macauley) is noted, but the information on the stone confirms the identity of the casualty. Catherine Ann, John’s wife, died in Stornoway on 17 April 1961, aged 73. From the limited resources available to me, I have not been able to find out if she remarried and / or had children.
John’s father, Donald Macaulay, passed away in the district of Uig in 1933, aged 80. 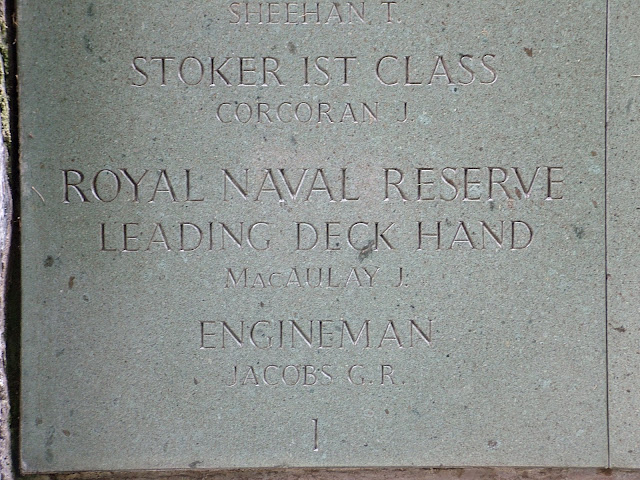 and on the Uig War Memorial at Timsgarry • Photographs of Balbriggan Coast Guard Station are the copyright of Mr. David Brangan and is reproduced with his kind permission.
Posted by ADB at 19:24 5 comments: