A mainly overcast day, with the odd brighter interval. Today is the Epiphany, Twelfth Night, so Christmas trees should be taken down today. The Orthodox Christian churches (Greece, Russia &c) do not celebrate the birth of Jesus Christ until today, as they did not implement the calendar shift that Pope Gregory ordained in 1582. Because of the inaccuracies of time-keeping, the calendar was a mere 12 days out of sync so he told people to jump 12 days. Not everybody has recognised this change. At any rate, the Xmas tree and its decorations have been packed away for another 11 months. On 6 December this year, it will make another appearance.

Over the Christmas period, this island raised its eyebrows when a car was removed without its owner's consent and chased down the A858 at Bragar by police. The driver promptly lost control of his vehicle and ended up in the ditch. He was arrested. Crime-levels here are mercifully low, which explains why the murder of Liam Aitchison in November was such a shock. This poor 16-year old was buried at Daliburgh's Hallan Cemetery last week. One of his alleged assailants was released on bail to a Highland address; the other was remanded in custody.
Posted by ADB at 23:07 No comments: Links to this post 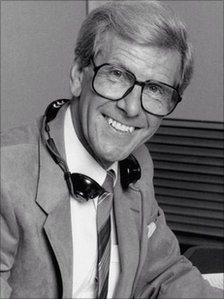 News was announced today that TV and radio presenter Bob Holness had died in his sleep at the age of 83. Most people will know Bob as the host on Blockbusters; I knew him through the BBC World Service as the presenter of Anything Goes, a popular music request show. The popular music referred to any genre you may care to think of, and I feel much endebted to Bob and his programme for introducing me to a wide variety of music. Although classical has my preference, I am not averse to music from the 1920s to the 1950s, before the onset of pop as we know it from Elvis onwards. Victor Borge and Spike Jones are among my favourites, but also the Laughing Policeman by Charles Penrose, 1926.

Bob is the second World Service host to die in the last four years that I had regular dealings with in the 80s and 90s. Gordon Clyde passed away in 2008 at the age of 75; he hosted The Pleasure's Yours and would play regular classical music requests from me for relatives. Bob also played several of my requests, and it is with sadness I learned of his death. He had suffered a series of strokes in the last decade or so.
Posted by ADB at 15:34 1 comment: Links to this post

Having returned from Stornoway after a 3-week absence, I found myself spending the day catching up with snailmail as well as emails, and other things related to my internet activity. It was actually quite an acceptable if cool day, with good spells of sunshine. There were also some showers of rain, later hail. Further south in the UK, another storm wreaked havoc. No such problems in the Hebrides. I usually miss one aspect of the Hebrides when I'm not there: the big skies.