Hurricane Rick, which formed south of Acapulco on Thursday, is now a category IV hurricane as it moves west northwest, parallel to the south coast of Mexico. Sustained winds near its centre are at 125 knots, that's 140 mph (220 kph), and will exceed 140 knots by tomorrow. That makes it a category V hurricane. As the storm veers north, the seawater temperatures (currently near 30C) will fall, and the atmospheric conditions will no longer be conducive to sustaining this intensity. By the time Rick makes landfall in Baja California, expected on Wednesday or Thursday of next week, it will be a category II hurricane. Still enough to cause extensive damage and disruption. Website Baja Insider is giving the local view, albeit somewhat behind. 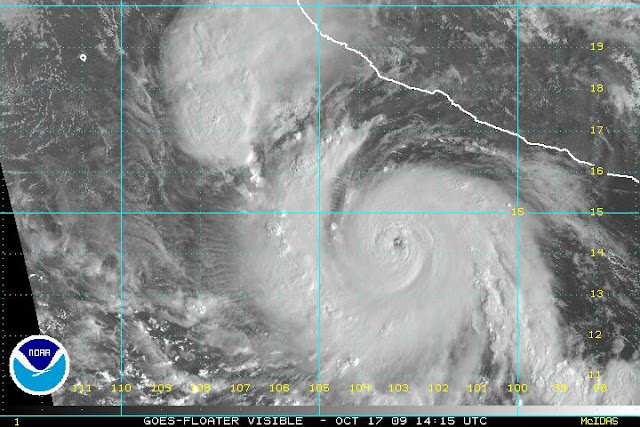 This morning, I took the 9.36 bus down to Elgol (Ealaghol in Gaelic - top image courtesy Flickr user vtveen, lower image courtesy Kennethverburgh.nl). It took its time, arriving at Elgol Pier at 10.15. Once you reach Elgol, it's a very steep descent from 110 to 0 metres. Not much to be seen there, apart from a stunning aspect of the Cuillins. Unfortunately, I haven't got the pictures available. Sgurr na Stri stands out between Camasunary and Coruisk, and the teeth of the Cuillins rearing up to the left. Rubha'n Dunain tapers out just beyond Soay. I climbed up the hill until the sign that said Camasunary 2 1/2 miles, Sligachan 10 1/2 miles. I joined that path and commenced an airy cliffwalk, and if I say airy, it was. It quickly became fairly rough, and required a bit of scrambling. Not to mention that point where it ended at the edge of a 100 ft precipice. Yikes! I'd missed a turning that was not signposted. Half way up the coast a glen comes up from the hinterland, and it takes a bit of mapreading to find the onward route. It remained a fairly tough undertaking, and was knackered by the time I collapsed on the beach at Camasunary. Lots of flotsam and jetsam up there. There is also a farmhouse and at the far end, right underneath Sgurr na Stri a bothy. This contained two sleeping platforms, one of them actually occupied (this was 1.30pm) by a sleeping person. Lots of candles in bottles. A shelf contained spare food. This bothy was fairly tidy. I've heard stories of people abusing these remote hide-outs for lonely booze-ups. I dabbled about Camasunary for a bit, then went up the hill and slowly, very slowly, made my way to Robostan, where I'd be waiting for a bus back to Broadford. I arrived there at 4.40, bus not being due until 5.30. So I decided to walk for a bit, rather than stand there and freeze. Half a mile beyond Strathaird House I came upon a lame sheep. It didn't run but merely hobbled painfully. When I stopped a little distance behind it in order not to scare it into hobbling into the road, into the path of an oncoming car, it looked round at me. Mutely saying "Now then, are you really going to kill me?". But I crossed to the other side of the road and it hobbled away. A few miles further, in sight of Torrin and the Red Hills, a German couple pulled over and offered me a lift to Broadford. Which I accepted. They were due to travel back to Karlsruhe the next day, but would fly to Frankfurt Hahn. Some 80 miles away from Frankfurt. Arrived back in Broadford at 5.45.
Posted by ADB at 13:09 1 comment:

No complaints about the weather, although the wind is a tad nippy. Mercury dipped to freezing overnight, but is currently nicely back up into double figures.

It is low tide at the moment, and it is quite a low tide, bearing in mind it is springtide. For those not much versed into matters tidal, when you get a springtide the flood tide comes in very high and the ebb tide very low. A few years ago, during an especially low tide, I was able to go out onto the exposed seabed and collect about 8 clams. No surprise then when I say that I never found another clam in the area concerned! It is quite disconcerting to think though that 6 hours later there was 17 feet of water above the place where I had been picking those shells.

Our MP has asked for the summer timetable for the ferries to be extended into November. Its current validity runs out next Saturday, October 24th. He states that the slashing of ferry fares, due to a government subsidy scheme, has promoted ferry traffic last summer. Mr Macneil appears to be unaware though that the tourist season tends to end at the close of the midterm break, i.e. by the penultimate weekend in October. Five years ago, when I was travelling western Scotland, I could not help but notice that everything ground to a stop by October 24th or thereabouts, and that was not related to the ferry services. Being in the Isle of Skye at the time, which can be reached by bridge, it was very noticeable. Also, the Stornoway to Ullapool ferry service is the same right through the year. Other services in the Western Isles do see a reduction in service though.
Posted by ADB at 12:58 No comments: