Rachmaninoff
The link plays a recording of a record, which is more than 50 years old. Jose Iturbi, who died in 1980, plays Rachmaninoff's Prelude no 3 in c# minor. The recording is deeply personal, as it was one of the records that my mother gave to my father on his birthday in the late 1950s. Technical quality is not terribly good, and that's not just due to the method of recording - holding a mike in front of an audio speaker. The record itself is a tad crackly. This record set me off on a journey around the world of classical music, which I explored using the BBC World Service's programs in the 1980s and 90s. The late Gordon Clyde, who died last year, presented The Pleasure is Yours, until 1990, followed by Brian Kay and Gordon's personal friend Richard Baker. I recorded pieces of classical music on cassette tape - and that tally stood at about 200 tapes some 6 years ago. I have not added since.

I am a very critical listener, and entertain pop music only on sufferance, as the musical quality is usually measured in the negative ranges on a scale of 1 to 10. Exceptions apply, such as these guys from 1977. Did I mention I play the piano?
Posted by ADB at 22:03 2 comments:

I was looking up the 20th century concert pianist Solomon Cutner, who lived from 1902 to 1988. He was a gifted pianist, whose career was cut short by a stroke. This paralysed his right arm, but in spite of that, he managed to finish a recording session on which little evidence of the stroke can be heard. The Wikipedia article links to an obituary in the New York Times, which states that the stroke occurred in 1965. Everywhere else the date is given as 1956. Transcription error? Don't think so. The NYT also states that the pianist recorded in the 1960s, which is not correct.

A gradual change is occurring in the weather today. After a glorious sunrise just after 8 am, the morning stayed sunny albeit cool - mercury at 10C. By lunchtime, a blanket of cloud started to move up from the south, and at 2pm the sun had gone. The front edge of a rain front is just coming ashore in South Harris, 50 miles to the south.
Visibility is extremely good, 50 km (30 miles), and earlier on I could clearly see the mountains of the Applecross Forest, 60 miles to the southeast on the Scottish mainland. 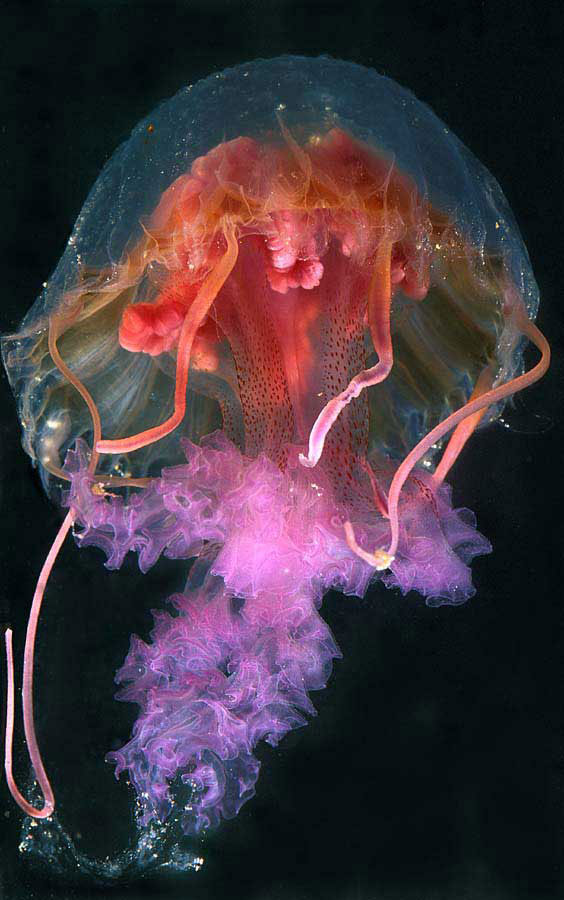 Out at sea, mauve stinger jellyfish are reported to be swarming. These creatures, a nuisance to humans, are deadly to fish, particularly farmed fish. A large part of the economy of Western Scotland depends on fish farming, and the Marine Conservation Society is monitoring the situation closely. If the jellyfish come into a fishfarm, they can decimate stock, leading to damage worth hundreds of thousands if not millions of pounds. This happened in Ireland in 2007, when billions of mauve stingers killed salmon in fishfarms off the north coast.
Picture courtesy glaucus.org.uk.
Posted by ADB at 15:23 1 comment: