Hurricane Igor, a category IV hurricane, is moving west across the Atlantic, midway between Africa and South America. The storm strengthened very rapidly, and is now carrying winds of 115 knots (130 mph) near the centre, and will intensify further to 130 knots (150 mph) during this week. As this system will veer northwest, it will probably miss the Lesser Antilles and remain out at sea for a number of days yet. 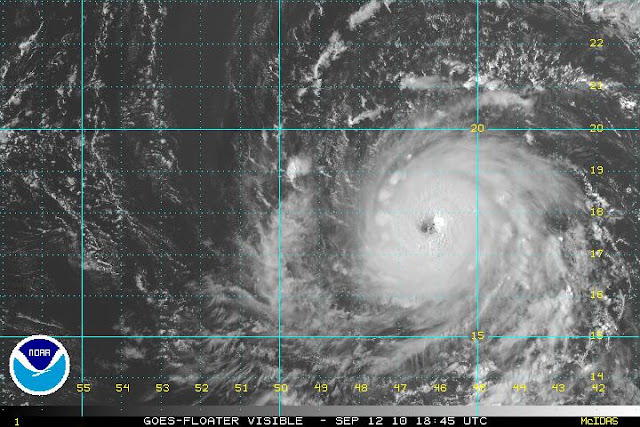 The twelfth tropical cyclone of the North Atlantic hurricane season is bringing heavy rains to the Cape Verde islands off the west coast of Africa. It will become tropical storm Julia within the next 24 hours. This system will also head northwest out to sea.
Posted by ADB at 20:27 No comments: Links to this post

I was very sad when I read about the wildfire that destroyed most of Sunshine CO, the home of fellow blogger David Wheeler. A few years ago, David kindly sent me a copy of a book on the village and its history. Now some 90% of its building lie in ashes, including David's own home. Although I've never visited Sunshine, having read the book almost makes me feel as if I have. I wish its inhabitants strength in rebuilding the place.
Posted by ADB at 19:05 No comments: Links to this post

The weather slowly deteriorated as the day went on, and it's been drizzling for the past few hours now - it's 6.30pm. Spent the afternoon on the final transcripts of the Napier Commission Report on Skye, leaving me only the 25 appendices to transcribe (60 pages in total). Some quite strong language coming to the fore, particularly from the landowners some of whom were quite averse to change. Once I've finished this, I may continue with the reports from the Northern Isles of Scotland (Orkney and Shetland), and carrying on with Sutherland.

I'm glad the Koran burning in Florida has been called off, as it would have played right into the hands of the very people who endorse the carrying out of atrocities like 9/11. Polarising statements, like the one made by Dutch politician Geert Wilders, just don't help. I am extremely concerned about Mr Wilders, whose party may be called upon to provide parliamentary support to a new coalition in Holland, combining the Christian Democrat (CDA) and Liberal (VVD) parties.
Posted by ADB at 18:38 No comments: Links to this post

To close my 9/11 entries, I post this video with music by Jean Sibelius, the Swan of Tuonela.
Posted by ADB at 02:00 3 comments: Links to this post

A scheduled posting, as I am writing this on the day as marked in the post title - but deferred for a few hours in order to leave my 9/11 tributes as sole entries for today.Viewing the 9/11 commemorations in New York was quite moving, and watching the replay of the television images of that day, 9 years ago, harrowing. The wounds are still raw for many, and it only seems like yesterday that the events unfolded. But it is not.

I cannot be bothered to give any more airtime to dotty preachers (Terry Jones) or cracked politicians (Geert Wilders) who seek to undermine the rapprochement between religions that (I hope) is occurring between Christians and Muslims. Events like 9/11 highlight problems that exist in world society at large, yes on that scale. Sending the military in might temporarily alleviate the issue, but the underlying causes should be addressed as well. The intractable Israeli / Palestinian confrontation is one of these, and I do not believe that any resolution is in sight. Actions speak louder than words. Hatred, borne of terrorist events, do not resolve anything either. I have no cut and dried solution, and nobody has. Chance events will dictate the progression of issues, and when one is resolved, another will rear its head.

For now, I'd like to close with this cartoon, made by Mike Lubovich.