Last day of November is the national day for Scotland. I have nothing against national pride, but I do have something against nationalism. I am pleased to note, though, that the nationalist government at Holyrood [Edinburgh] is losing relevance at a rate of knots. Knots being what the administration is tying itself into, with inconsistency being the common denominator.

Today is a grey and overcast day in Stornoway, with a breeze whistling through the streets, blowing the last of the dried out husks of leaves in front of it. This autumn has been quiet, with only one episode approximating a gale in it. I am making no predictions for the winter.

Today is also the last day of the hurricane season in the Atlantic, Eastern and Central Pacific basins. The southern hemisphere season starts in earnest in December, what is the start of their summer.
Posted by ADB at 11:26 2 comments:

November is coming to a calm close, here in the Outer Hebrides. The tourists have long gone, the roads have reverted to commuter routes, and not a bicycle to be seen. Apart from those ridden by local residents, who are easily picked out as not carrying large amounts of luggage. Darkness falls before 4pm at this time of the year, and ice has been a regular occurrence in the mornings and late evenings. It has even claimed the lives of a married couple in the village of Gravir, who appear to have slipped and fallen badly late one evening. They were laid to rest in the village cemetery last Friday. May they rest in peace. 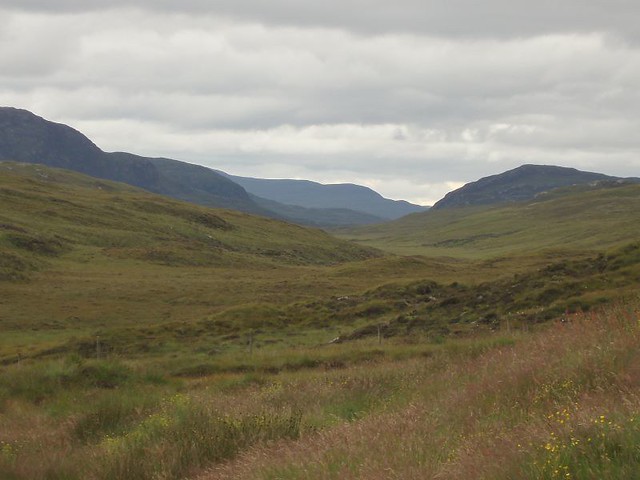 Watching the unseemly muddle that is the preparation for Brexit, with government ministers spouting ideas that are subsequently shot down in flames leaves me with only one conclusion.

Nobody gave it a moment's thought as to what would happen in case the Brexit referendum of 23 June 2016 yielded a vote for the UK to leave the EU. Worse than that, the vote was arrived at based on false, inaccurate or absent information, and mainly based on base emotions like fear and nationalistic fervour, see my earlier post on this subject.

In my opinion, which counts for nothing, the Brexit referendum should be cancelled and rerun, based on proper information. Yes, and pigs will fly.
Posted by ADB at 13:04 2 comments:

Remembrance Sunday has been and gone. I watched the parade in Whitehall on the television, and was impressed with the people in it, and some of their stories. It is for all wars since 1914, including the two world wars, the conflicts in Korea, Suez, Iraq and Afghanistan.

We have a very large number of war memorials in this island, and I'll repeat the numbers involved in the Great War.

9 November 1938 - an organised mob of Nazi forces and sympathisers go on the rampage in towns and cities across Germany, smashing and destroying Jewish-owned property and businesses. It was to be a marker, to what was to come during World War II - the extermination of anyone deemed sub-human by the warped mind of Adolf Hitler and his henchmen. Jews topped their league of the unfit, closely followed by gypsies, the mentally ill and many many others. The Reichskristallnacht was a night of infamy, and not just to Germany.

For Hitler was allowed to get away with literally murder for several years beforehand. In 1936, he occupied the Rhineland which had been ceded to France at the end of the First World War. The League of Nations, a toothless talkingshop, cried wolf but had no bite. In March 1938, Nazi forces marched into Austria to join that country to Germany, an event referred to as the Anschluss. Neville Chamberlain flew to Munich to meet with Adolf Hitler on 30 September 1938, returning with the infamous phrase: "Peace for our time". Six weeks later, the Reichskristallnacht took place, a sign of ill omen. Only a few months later, Germany invaded the Sudetenland area of Czecho-Slovakia, and again, nobody moved a finger to stop. In September 1939, Hitler thought he could get away with the invasion of Poland. But instead, it prompted the outbreak of the Second World War.

The lights have gone out in Europe, it was said at the time. The lights in Europe were extinguished in 1914, and had not been relit, not even at the end of the First World War. The Versailles Peace Treaty of June 1919 contained all the ingredients for another war, which duly materialised.
Posted by ADB at 11:06 1 comment:

There seems to be an international resurgence of what I can only view in a negative light: nationalistic fervour.

We have seen plenty of it in Scotland in recent years, with an independence referendum that was run, by the Yes camp, along those lines.

It is actively propagated by Vladimir Putin in Russia, whose unstated aim is to reunite the old Soviet Union into a new Russia, starting with the Crimea, and possibly continuing with the Baltic States. Fomenting political instability, claiming discrimination against Russian minorities will be given as pretext, once Putin sees the way clear - at the moment it is not.

I was shocked, back in June, when the Brexit referendum yielded a (narrow) vote to leave the EU, again on the grounds of nationalism. Give Britain its sovereignty back, away with meddling Brussels bureaucrats. Teresa May's government thought they had the political mandate to act on the result forthwith, but a challenge in the High Court a few days ago delivered the judgment that Parliament should have a say first. The three justices who handed down this judgment were subjected to on-line and off-line abuse. The Lord Chancellor has (at moment of writing) not spoken out against this, and I hope Members of Parliament will call on her in the Commons to do so, however belatedly. What really concerns me is this cry "the will of the people". Why do we need referenda, when the will of the people is being acted out by MPs, elected every 5 years (or so)?

Glancing across the Atlantic, with the American presidential election grinding to a close shortly, we have the Republican Party's candidate Donald J. Trump promising to put America First. Build a wall along the Mexican frontier, at the Mexicans's expense; threatening to negate on clause 5 of the NATO treaty, which obliges all member states to act militarily if another member state is under attack; and choking dissent.

Fourteen years ago, I attended a concert in London to celebrate the Golden Anniversary of the coronation of Queen Elizabeth II. When I approached Buckingham Palace, the mood I encountered was not one of celebration and merry making. It was an ugly, threatening, nationalistic mood, redolent of the Germany of the 1930s.
Posted by ADB at 13:13 1 comment:

So we're all getting aerigated over a Russian warship passing through the English Channel on its way to the world's current hotspot, the Middle East. Its request for refuelling in Ceuta was cancelled, in order not to upset people too much, because the planes on the deck of the aircraft carrier Kuznetsov are going to do some bombing in Aleppo. Dreadful.

Could somebody please explain this sarcastical cynic what the difference is with an American naval battle group going into the Persian Gulf in 2002 / 2003 to do some bombing in Iraq, prior to an invasion into that country? I mean, the British parliament voted down an invite to do some bombing in Syria 3 years ago, and now we're crying wolf because the legitimate government of Syria is being bolstered by its powerful ally? After all, Saddam Hussein was the (sort of) legitimate leader of Iraq, until the British and American governments decided to take a dislike to him.

In 2011, there was an uprising in Syria against that country's dictator, Bashir al-Assad, which led to a brutal civil war which will keep going for a bit. The city of Aleppo has become the epitomy of all that is wrong about foreign interference in an internal squabble - whether it be by the Americans against Assad, or by the Russians for Assad. Why is this godforsaken dustbowl so important? Because Syria is Russia's only foothold in the Middle East - and will never, ever, give it up. The Americans are jumpy about that, on account of good old oscar india lima - OIL - from surrounding nations.

Da'esh? Gradually being bombed into submission, but used as an excuse for more bombing.

Wish everybody would just butt out.
Posted by ADB at 21:11 1 comment:

During the recent Royal National Mod, the precinct of the Nicolson Institute was open to the public. I took the opportunity to walk through and take some photographs - the school was newly built in 2012. 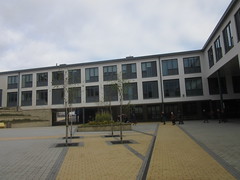 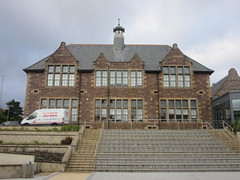 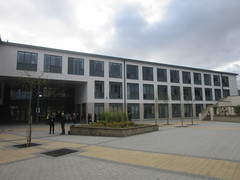 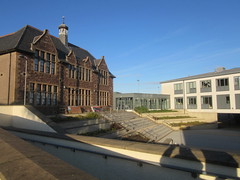 The oilrig Transocean Winner has arrived at Aliaga, Turkey, on the deck of the heavy load transporter Hawk. The ship came to anchor there around 5pm GMT yesterday evening after a 17 day journey from the Isle of Lewis. At the moment of typing, preparations are being made to offload the rig from the Hawk and take it for demolition.

The oilrig was being towed from Norway to Turkey on the night of 7th / 8th August when a well-forecast gale caused it to be separated from its tug. The TW was then blown ashore off the beach at Dalmore in Lewis. It became an unwanted addition to the landscape, with risk of pollution (minimal in the end); caused inconvenience to the villagers, visitors to the cemetery (which serves the district) and visitors to the beach. 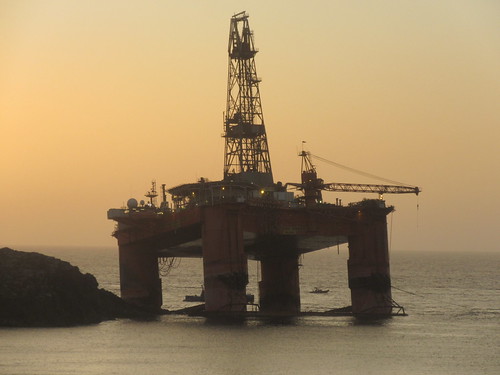 On the evening of August 22nd, several powerful tugs managed to pull it off the rocks. It took them nearly two days to cover the 54 mile journey to Broad Bay, on the other side of the island. As the tanks in the base of the platform had been breached, a constant flow of compressed air was required to keep it afloat. 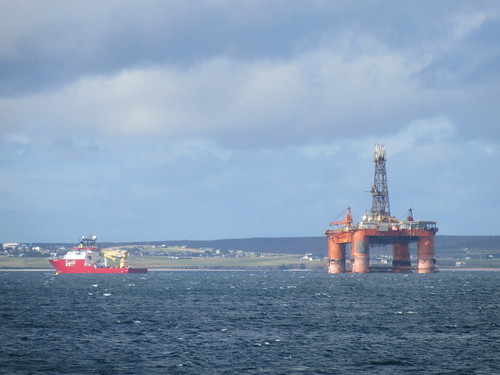 A heavy lift vessel, the Hawk, was chartered to load it and transport it to Malta and finally Turkey. This arrived in late September, but it was not until October 10th that the rig was finally loaded, and not until October 14th that clearance was given for it to be moved.

After passing through the Irish Sea, Bay of Biscay and Straits of Gibraltar, the Hawk arrived at Malta for a brief stopover. Last night, the ship reached its destination. 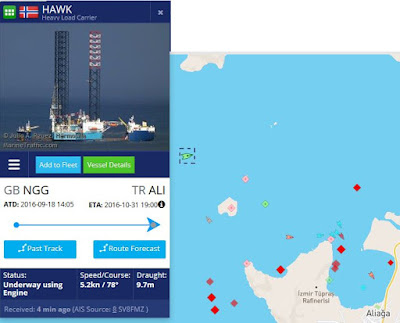 Transocean Winner - good riddance.
Posted by ADB at 11:31 No comments: