The family who lost 38-year old Jacqueline Fleming to swineflu yesterday now also have to come to terms with the loss of her child. Jack, who was born 11 weeks premature on June 1st, died in the special care baby unit at the same hospital in Paisley where his mother passed away on Sunday.
Posted by ADB at 23:04 2 comments: Links to this post 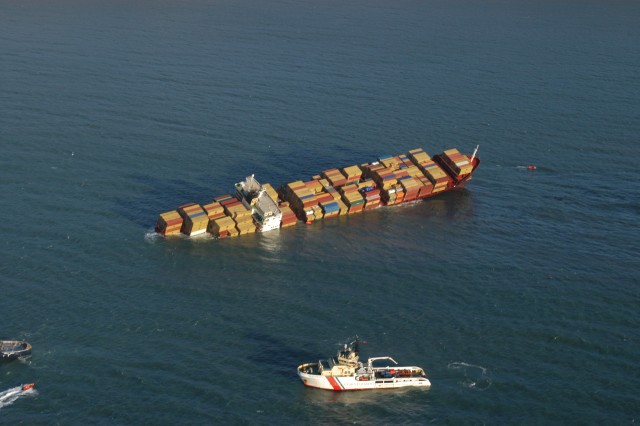 Those who have followed me here from Northern Trip may remember my report on the sinking of the container carrier MSC Napoli off Branscombe Bay in Devon in January 2007. The image above shows her on 21 January 2007. This was followed by widespread looting of its cargo when the containers washed up ashore. The Napoli has been cut into pieces and the last bit will be lifted off the seabed in the next few weeks.

Recently, 1100 metres of chain have been lain on the seabed, under the wreck of the Napoli - 90 metres of chain weigh 12 tons - and these will be used to hoist bits of the wreck up. Read more on the MCGA website.
Posted by ADB at 22:22 1 comment: Links to this post

The Atlantic hurricane season has been underway for 2 weeks now, and the East Pacific season for a month. Only the Atlantic has seen a formal tropical depression form, and that one never gained sufficient strength to be given a name. In the East Pacific, neither has happened at all. It's still very quiet on the hurricane front, not abnormal for June. If you're in Hurricane Alley, don't drop your guard.
Posted by ADB at 15:22 No comments: Links to this post

Swineflu last night claimed its first victim in the UK: 38-year old Jacqueline Fleming from Glasgow died in the Royal Alexandra Hospital in Paisley, near the city. She had recently given birth to a premature baby. Meanwhile, here in the Western Isles, four people are kept under observation for suspected swineflu, which would be the first cases of the disease in the islands.

Across in Iran, the rumpus surrounding the allegedly rigged election of Mahmoud Ahmadinajad as president continues. The country's supreme leader has ordered an investigation, whilst the opposition leader, Mousavi, is warned he will be held responsible for the consequences of an illegal rally that is taking place in Tehran. Twitterers in Iran are seeking proxies to relay their messages through, and the authorities are trying to close those as quickly as possible. The messages do keep coming through on this Twitter Search.

In Stornoway, it is a bright, sunny day but with a cold-feeling easterly wind. Temperature 15C / 60F. Typical spring weather.
Posted by ADB at 12:53 1 comment: Links to this post