73 years ago, the D-Day landings (Operation Neptune) were underway on four beaches in Normandy, France. It was the beginning of the end of the Second World War in Western Europe. The turning point in the east had come more than a year before, when the forces of Nazi Germany were defeated at Stalingrad, the present-day Volgograd. Originally, D-Day was to have been on June 5th, but the weather was unfavourable. Also, a decoy operation had been put in place to lure the Nazi German forces into thinking that an Allied invasion would occur near Calais. Although the invasion marked the beginning of the end, war was to continue to another 11 months in Europe and 14 months in Asia.

We remember all those who laid down their lives in the defense of freedom in Europe.
Posted by ADB at 12:03 1 comment:

It is now nearly a fortnight since I returned to Stornoway, after a three-month absence. Much has changed, and yet so little. The town looks the same it did in February, except spring has arrived, and leaves and flowers are out. The nights are short and light, with daylight remaining along the northern horizon between midnight and 3 am, the darkest hours of the day. 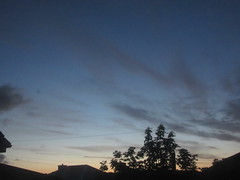 Just before I left Holland, news emerged of a terrorist attack on a pop concert in Manchester. 22 people, mainly teenagers and children, were killed. Among them was a 14-year old girl from Barra, Eilidh Macleod. Her body was repatriated yesterday, and her funeral was held today. Barra was at a standstill, and most of the islanders were to be found in or around the church in Castlebay. Eilidh was laid to rest in Vatersay, adjacent to Barra, where she was born.
I did not know Eilidh, or her family. I was deeply touched and saddened by the senseless loss of life, perhaps even more so because it involved young people, teenagers and younger. A following attack in London, last Saturday, was equally atrocious. But this loss, to such a small community, was almost unbearable. It certainly was to the islanders.