The day started breezy, cold and wet, but as I type (5.30 pm), the sun is out and the wind has picked up further. Last night, I found a bag with four photographic films, which were nearing their expiry date. Fortunately, someone still had a use for them, so I posted them to the other side of the country where a degree student photography will be quite happy.

The nutty parson in Florida has apparently decided not to burn copies of the Koran. Well, aren't we all relieved. I think this 50-of-a-flock preacher has gotten way too much publicity, and whilst I'm an overuser of the Internet, I'm more than happy to acknowledge the power for the worse that the WWW has put on display here. Some 10-15 years ago in comparable circumstances, this numpty would never have gotten the publicity he got in 2010. I maintain my position that it should be possible to have an Islamic study centre in the vicinity of Ground Zero.  The perpetrators of 9/11 acted not out of religious conviction, rather, they abused religion for political motives. Whilst American foreign policy is at times breathtakingly horrific, it is never fair to blame or abuse individual citizens for that. One of my former Internet contacts, a lady from Virginia, broke off contact with me (as a European) over the abuse she received in Rome for being an American.

Unless I think of anything else to blog about this evening, my next two postings will appear simultaneously at 1.46pm BST tomorrow afternoon, that is 8.46 am EDT - the anniversary of 9/11. I shall resume normal posting on Sunday.
Posted by ADB at 17:46 1 comment: Links to this post

Reasonable day, with a bit of sunshine about. Spent most of the day completing the penultimate chapter of the Napier Commission's report for the Isle of Skye. The factor for about half that island's estates was grilled over dozens and dozens of pages, some of it boring in the extreme, other items interesting. However, it was remarkable that nobody from the estate that Alexander Macdonald himself owned had come forward to give evidence to the Commission. Macdonald said he was 'very proud of his crofters'. However, the Commission was not hesitant to pose pertinent questions, and in all, the evidence does not do the landed gentry in Skye any favours. Much has changed since 1883. 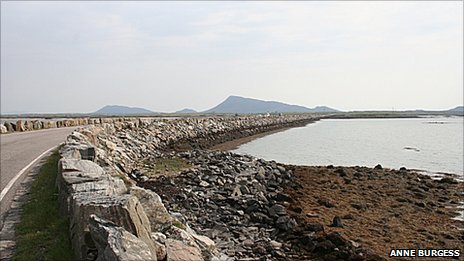 Image courtesy BBC
On Wednesday, it was 50 years ago since the causeway was opened that linked the islands of North Uist and Benbecula. Previously, people had to cross the waters on foot, fording at the lowest point of the tides, dodging quicksand and some having to engage the services of a guide. Before 1960, some Uisteachs had been to Yokohama before they'd visited Benbecula.

Also on Wednesday, Princess Anne visited the Isle of Eigg. All power on that island is generated using wind, hydro and solar energy, with diesel generators only present as a back-up. Eigg was bought by its residents in 1997 for £2m, after the sitting laird turned out to have bought the island with no money in the bank.
Posted by ADB at 15:44 2 comments: Links to this post