Overcast, wet and windy. With a temperature of 9C, we're lagging behind the rest of the country. Can't say it bothers me very much; I prefer the cooler weather. Here in the islands, a ferocious row is going on in the Isle of Barra, 120 miles south of Stornoway. The school in the main town, Castlebay, has been receiving less than favourable reports from Her Majesty’s Inspectorate for Education, now for 3 years in a row. Parents are concerned and so are the pupils. A local internet blog highlighting the issue received 100 comments, whereas commonly the number of comments on its entries is around a dozen or so. More remarkable is that the Council blocked access to the blog from computers at the school in Castlebay. In spite of a visitation by a senior education official, parents’ and students’ fears are by no means allayed, and a move could be afoot to wrench control of the school from the council to the community. This would require the consent of the Scottish Government. 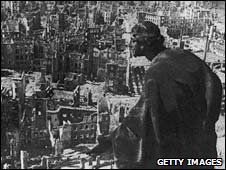 A report has been published in which the deathtoll of the bombing of the German city of Dresden in February 1945 has been put at 25,000. During three nights, British and American planes bombed the city in the east of Germany, raising a firestorm as a result. Neo-nazis have put the deathtoll as high as half a million, a claim disputed by the report's authors. They say that far fewer refugees from the east, who had been fleeing the advancing Red Army, had been in the city. Critics have claimed that the bombardment served no military purpose, but others have said that Dresden was an important logistical centre at the time.
Posted by ADB at 12:31 No comments: Links to this post