A quiet day with not much happening in the world of the Western Isles. It is milder than of late, with the mercury at the dizzying height of 13C / 55F. The birds are all aflutter around the birdfeeder, and the starlings are going to town on a lard-based feeder. When the sun rises again tomorrow morning, they'll have the added benefit of a feeder full of peanuts and another lard ball on the tree. The squabbles and squeaking around the tree will be even louder than today's, I'm sure. BBC Highland's newsreader garbled up the name of a particular breed of sheep, which forages on St Kilda. Rather than calling them by their proper name of Soay Sheep, he referred to them as Soya [sic] sheep. This had to do with a unique breed of mouse, the St Kilda field mouse. The house mouse of those islands died out shortly after people left in 1930. 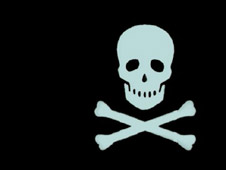 Piracy remains a major problem in the Indian Ocean, east of Somalia. A yacht, carrying an elderly British couple, has been seized by the pirates and is being tracked at a distance by a European Naval Force. Meanwhile, closer to home, a skull-and-crossbones flag that had been flying over Inverness was lowered after a former seaman protested, saying that piracy was no laughing matter. The Jolly Roger had been hoisted because of Halloween, this coming Saturday.
Posted by ADB at 18:48 4 comments: Links to this post