Three hurricanes at the same time in the Atlantic tonight, for the first time in 12 years. This is the eighth time in recorded history that this has occurred.

Karl is headed for Mexico, with landfall expected between Tampico and Veracruz with winds of about 85 knots (near 100 mph) and a projected rainfall total of 5 to 15 inches (125 to 375 mm).


Julia is not posing a threat to land, being located 2000 miles southwest of the Azores, and its proximity to Igor (below) will bring about its demise after the weekend.

Igor has slowly weakened from a top intensity of 125 knots (that's a trifling 140 mph) down to 110 knots (125 mph) this evening as it heads towards Bermuda. This island will feel the effects of Igor during Saturday.

NASA/GSFC provided this below image, showing (left to right), Karl, Igor and Julia.  Jeff Masters' Wunderblog supplied some of the information relayed. 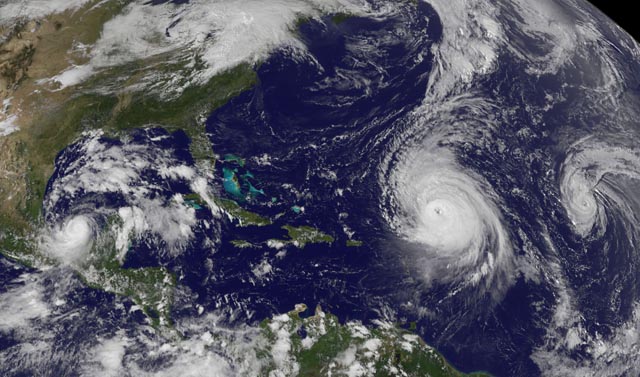 A breezy but bright day, with the odd shower about. Isles FM made my day with the clanger of the week: "Pope Benedict XVI is arriving in Stornoway today for a state visit...". The newsreader realised his mistake, but kept going without saying a word about it - but his embarassment was audible in his voice. His colleague, who took over after the weatherforecast, mentioned that you can always tell when someone hasn't had their morning coffee.

The Pope has arrived at Edinburgh, 200 miles southeast of Stornoway, for a four-day state visit to the United Kingdom. He was greeted at the airport by the Duke of Edinburgh, the Queen's husband. After a speedlimit-breaking drive from the airport, the pontiff arrived at Holyrood House, the Queen's official residence in Edinburgh, where he was greeted by Her Majesty, the Archbishop of Canterbury, the UK Deputy Prime Minister, the Scottish First Minister and other senior officials. Later, Pope Benedict will be driven through Edinburgh on his way to Glasgow, 45 miles to the west, where he will conduct mass on Friday. A Gaelic choir from the Uists will sing at that event.
Posted by ADB at 11:43 3 comments: Links to this post

A day of short but very sharp showers, interspersed with pleasant warm sunshine. Went to the cemetery at Gress during the afternoon, where I located another seven war-related gravestones. I took my time going through the graveyard, which is fairly extensive. It now gets dark before 8pm, which is getting depressing. Gress during a shower The village of Back across the Gress River

Posted by ADB at 11:35 No comments: Links to this post