Very warm in Stornoway today - 22C / 72F and rising. The mainland could get 27 or 28C (around 80F), and we're probably not going to be very far behind. A cruiseliner in today, the good ole Marco Polo. She is a regular, and knows better than to be swinging around on its anchor chain, unlike the Adonia yesterday.

The new MV Loch Seaforth will not come on service now until October, due to delays in fitting out at Flensburg.

A transport plane is heading west from Charkiv in Ukraine to Eindhoven in the Netherlands, carrying the bodies of about 200 victims of the MH17 aircrash. Another 100 are still unaccounted for, and some may never be found as they could well have been obliterated in the rocket strike. Sorry to be so blunt. It has been established that the downing was not intentional, but the idiots in eastern Ukraine obviously didn't have the brains to operate a sophisticated anti-aircraft missile system.

At 3pm this afternoon, the plane carrying the remains will touch down at Eindhoven. It will be met by King Willem-Alexander and various other high-ranking officials, amidst a day of national mourning in the Netherlands. 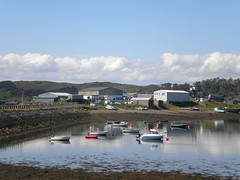 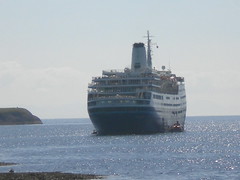