Southerly winds, just over 30 mph this morning, which are set to rise steadily through the day to galeforce, 40 mph. Gusts will increase to 60 mph, and I have my doubts about the ferry services around the west coast of Scotland. They are on amber alert for disruption. Force 7 will make for rough crossings - force 8 is borderline.

The developer who was going to build the £200m Eishken windfarm, GDF Suez, has pulled out of the project. This makes it very unlikely that (a) the interconnector will be built across the Minch and as a result (b) another developer will be found.

By mid-afternoon, the winds increased to gale-force, 40 mph, with gusts to 52 mph. The ferry between Uig and Tarbert and the Sound of Harris ferry are both cancelled. The Ullapool ferry has left Stornoway, but may not return this evening. It is blowing a good force 8, gusting to 65 mph at the Butt of Lewis - a very exposed location. Apart from Saturday, it is going to stay windy right into next week.

Seafront Stornoway: spindrift blown up from the water, difficult to proceed on foot. Very wild - 7.20 report suggests wind has increased to force 9 (47 mph), gusting at 63 mph over at the airport.

By 10pm, there are a few flickers on the electricity network - not surprising with tonight's strong winds. The automatic weatherstation at the Eoropie Tearoom records windspeeds between 50 and 70 mph at the moment. The airport here at Stornoway keeps it at between 35 and 55 mph, less exposed and low-lying.

Tragedy does not come alone, as a cursory glance at a death certificate showed tonight. Yesterday, I mentioned a North Uist man, Ewen Macdougall, who might be eligible for War Dead Status. On checking the death certificate, I find that the following entry mentions his sister, Annie, aged 17, who died the day after his brother, having suffered from pneumonia and typhoid fever. The registrar who had to record the death of these two was in fact their father. 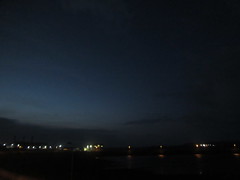 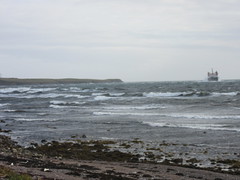 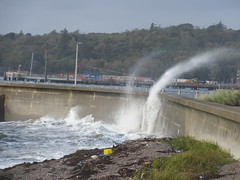 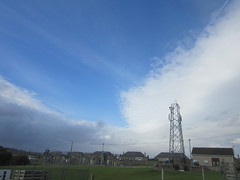