A cold, grey and initially wet day. We did not get above 11C / 52F all day, with a cold and strong northwesterly wind blowing. The ferry sailed to Ullapool this afternoon, but is not coming back tonight, meaning that the 7 am sailing from Stornoway is off as well.

Tropical cyclone Irene passed over Times Square in New York at 9 am (local time) this morning, turning the barometer down to 966 mbar. It was below hurricane strength, although it was still packing some nasty winds on its eastern flank. Storm surge flooding did occur in the centre of the city, but all in all, Irene's impact appears to have been not as severe as initially feared. As I type (just after midday EDT), the circulation around the cyclone shows up quite nicely on the windmapper site. The highest winds, on Mount Washington, are "only" 53 mph - that's still a force 10 in my book. Elsewhere, the storm appears to be spinning down at severe gale force. Irene will be turning into an extra-tropical depression as it scoots away northeast over Labrador and out towards Greenland and Iceland. 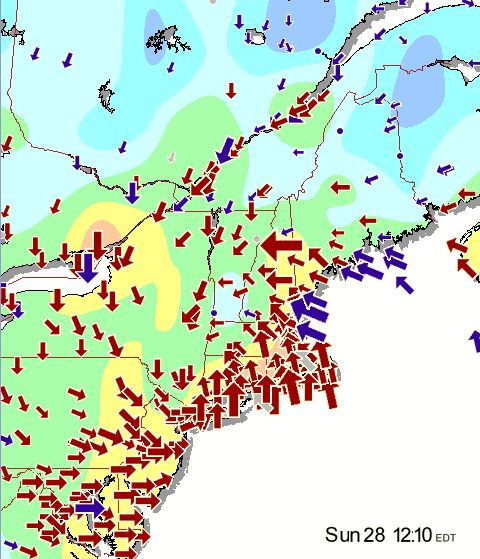